Alan Browne is determined to see Preston North End embark on a winning run after their largely positive first game back in the Championship was rewarded with only a point, as Luton Town’s Callum McManaman equalised late on to cancel out Scott Sinclair’s opener. 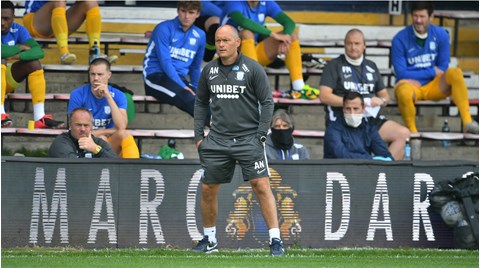 Alex: “We Did Enough To Win The Game”

The green-clad visitors saw more of the ball and the better of the chances for the vast majority of the contest at Kenilworth Road but Sinclair’s second of the season, slotted coolly beyond goalkeeper Simon Sluga after 52 minutes, proved not enough to defeat the Hatters.

Speaking to the media after the game, the Lilywhites’ No.8 conceded that it was disappointing not to have taken all three points, and stressed the importance of setting things right with a winning run in the final eight matches of the campaign.

“We went there today with the intentions of winning and it almost seems like a loss to be honest, we dominated the game, created the better of the chances, and I think that was probably their only shot on goal [McManaman’s equaliser].

“It was a great strike to be fair, but the game should be dead and buried by then. It feels like a loss almost and we’re obviously disappointed.

“We’re not content at just having a good season up to now and then fade away; we want to push it all the way and make that next step of getting into the Play-Offs. To only come away with a point today is obviously massively disappointing but it keeps us in sixth spot for now.

“We’ve got to start winning games now, ideally we would have liked to have won today but there’s eight games remaining and we’ve got to win as many of those as we can.”

While disappointed not to have come away with a win this afternoon, the Republic of Ireland international hoped that more chemistry at the top end of the pitch would follow as he and his team-mates gain more match practice, following the three-month absence.

“We should be coming away with a win there, given the circumstances, the way the game went, it was total domination from start to finish,” he continued.

“To not win was obviously gutting for us but it’s still early doors for us in terms of the break and it’s our first game back, so it might take a little bit – obviously, we can’t let it go on too long – a game or two to click at the top end of the pitch. I think that’s probably the only thing we’re lacking at the moment.”

The 25-year-old was deployed at right back against the Hatters, their diamond formation in midfield allowing he and fellow full back Andrew Hughes on the opposite wing plenty of space to move into down the flanks.

“I think going forward is what makes me stand out in that position, the game kind of opens up as soon as you get some space, I find it quite comfortable taking on a winger because they’re not quite as defensively minded as players that I’ve been used to marking, I’m usually marking a centre midfielder or your deep sitting midfielder.

“Once you go past that winger, the game just opens up to you and you’ve got plenty of options. I find it quite comfortable there but I think there’s probably players better suited to that position.”

Next up for the Lilywhites is the visit of Cardiff City for a lunchtime kick-off at Deepdale next weekend, before welcoming Derby County to PR1 the following midweek for our 5,000th league game.