Luton Town manager Nathan Jones took charge of the Hatters for the second time less than four weeks ago, but he is ready for the resumption of the Championship. 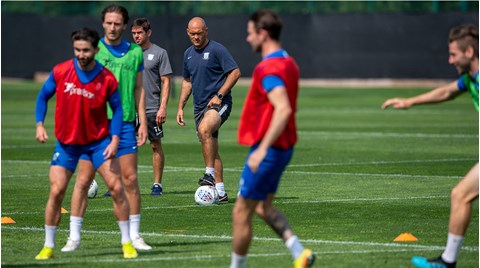 Alex Neil: “We Are In A Better Shape Than When It Stopped”

18 June 2020
Speaking to The Luton News, Herald and Post, Jones was reasonably happy with his team’s preparations.
“It’s as good as it can be, it’s a short mini pre-season if you like,” he told the local paper.
“Three and a half weeks I’ve been in, the first week we were small groups and then we’ve had three weeks to work with them, so we’ve had a little bit of a microwave one if you like.
“But they’ve all worked very hard, all been responsive, I knew that that’s the group they are anyway, so we’re in as good a shape as we can be.”
The Hatters prepared for the visit of the Lilywhites with a home game against Brentford on Tuesday, which they won 4-2, to assess the fitness of his squad, but he was giving nothing away in terms of the options available to him.
“There’s one or two little things, one or two coming back, everyone’s training, but there’s one or two who are not quite ready yet as they’ve not quite had enough training as they either had niggles before I got here, or have picked them up,” he continued.

“So, we’re not far off a full squad to choose from, there’s just one or two lacking the sharpness and the match fitness to be able to be considered to start.

18 June 2020
“Everyone got through [the Brentford game], that was a vital one. It was a very good game against Brentford as you always know what you're going to go get when you play them, so it was much-needed.
“You see where players are, what kind of fitness, sharpness, mentality they have.
“It’s vital to do that, we’ve had in-house games, you see players flourish, some don’t do quite well, it’s totally different when it’s outside opposition.”
Returning to familiar territory has been easy for the former Stoke City boss, with many of the players he previously worked with still being part of the set up.
“I know every single one of the players pretty much and worked with the majority, about 80 per cent of them.
“The others I know very, very well, so it’s a squad I know well and that was one of the big things for coming back,” he added.
To watch the resumption of Sky Bet Championship action you can sign up for a £10 match pass and watch the full game on iFollow PNE – just click here to sign up now.