Cardiff-born Andrew Hughes admits the clash with the Welsh side is always something he relishes – and he now hopes to have put his injuries, which have plagued him this season, behind him. 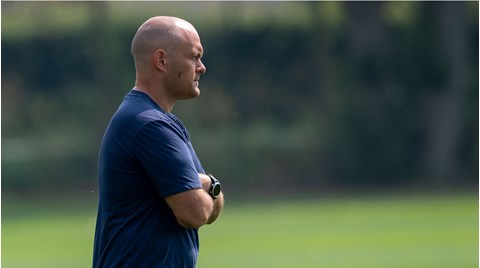 The left back was at Cardiff City as a youngster, but the now 6’2” defender was released at 15 for being too small – his sudden growth didn’t happen until a year later.

He wasn’t then sure of his future, decided to go to college, but a chance game led to him being snapped up by Newport County – and a climb back up the football leagues.

“Cardiff is mainly a rugby country and there wasn’t much football going on,” he told The One And Only.

“Most of my PE lessons were rugby, but I wasn’t the best at it. I was always more about football and I used to go to Cardiff City with my dad.

“Most of my family are City fans, they are Cardiff through and through.

“I began at the centre of excellence, I was a left winger rather than a left back then, and it changed into an Academy while I was there.

“I was really young, nine maybe. You have a meeting with the manager at the end of every season and get told if you are coming back.

“Most years I was asked back but then, at 15, I was told I was being released for being too small.

“I wasn’t very big at that time – my growth spurt didn’t come until I was 16 - but I say to this day, leaving Cardiff at that age and going out and playing first team football was probably the best thing which happened to me.

“Don’t get me wrong, it was heart breaking at the time, but it makes you grit your teeth more and pick yourself up and go again and I think it stood me in good stead.”

There’s loads more from the No.16 in this weekend’s special triple programme that covers the Cardiff City, Nottingham Forest and Birmingham City games. It’s 84 pages long and more details can be found by clicking here.

You can order this programme, plus the very special 100-page programme for the 5,000th league game against Derby County on Wednesday, by clicking here now and have them delivered to your door.