Some memorable events on this date, starting 19 years ago when one of the never-to-be-forgotten games happened at Deepdale when Trevor Francis brought Birmingham City to PR1 for a Play-Off second leg tie.

The night to remember saw PNE come through a dramatic penalty shoot-out to defeat Birmingham City and reach the first division Play-Off Final. 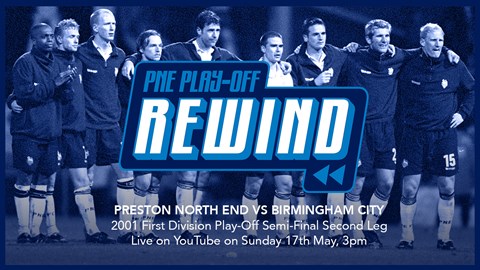 Relive The Birmingham Game This Sunday!

15 May 2020
Marcelo and Darren Purse missed Birmingham's first two penalties and Rob Edwards failed to convert for the home side before Paul McKenna scored the all-important penalty to send North End through.
The Lilywhites had earlier levelled matters in the two-legged tie when David Healy cancelled out Nicky Eaden's goal from the first meeting. Geoff Horsfield then struck in the second half to restore the visitors' advantage and it seemed PNE's cause was doomed when Graham Alexander missed a late penalty to equalise.
But David Moyes' side refused to give up and reaped their reward when Mark Rankine scored a dramatic late equaliser to take the game into extra-time.

Blues keeper Ian Bennett twice pulled off crucial saves to deny Edwards and Healy before the game went to penalties. Angry Birmingham boss Trevor Francis did not help his team's nerves when he ordered his players to pitch-side before they returned to the centre circle. The visitors lost on penalties in the Worthington Cup Final and their spot-kick misery was compounded as they lost in similar circumstances again.

And they were left ruing several missed opportunities in normal time to put the tie out of North End's reach.
In the eighth minute, Jon McCarthy's persistence was almost rewarded. He chased what seemed a lost cause and tried to divert the ball past Lucas, but the keeper parried and reacted well to get an outstretched leg to Marcelo's shot from the rebound.
The fall-out from the move saw Birmingham's injury jinx strike again when McCarthy, who has only recently returned from a lengthy lay-off, was forced off injured. PNE responded to the early scares by carving open an excellent opening when Jonathan Macken crossed low for fellow striker Healy.
He seemed offside but no flag was waved and it was Birmingham's chance to breath a sigh of relief when Healy's shot was straight at Bennett.

Martin Grainger then appeared to handle the ball as he tried to clear a home throw-in, but Healy made any appeals irrelevant by powering an angled shot high into the visitors' net.

Marcelo's turn and shot was saved by a well-positioned Lucas before Danny Sonner headed against the crossbar from a Stan Lazaridis cross. Lazaridis had come on at half-time and was a constant thorn down Moyes' side's left flank.
Just when the visitors might have been wondering about their Play-Off curse, Lazaridis' 59th minute cross was missed by Marcelo. But his strike partner Horsfield arrived at the far post to steer the ball past Lucas.
With an extra confidence about their play, Birmingham almost put the tie beyond PNE's reach shortly afterwards. Marcelo's header from a Grainger corner struck Lucas, who manged to get a hand to stop Horsfield nodding in the rebound.
North End thought they had pulled level when they were awarded a penalty after Sonner's hand-ball, but Alexander's spot-kick rattled the crossbar.

However, just when the visitors finally thought they had made it, the home side equalised. An acutely-angled Lazaridis shot rolled across the home goal-line and PNE immediately went up the other end and scored. Healy's shot was only parried by Bennett and industrious midfielder Rankine, slotted home the loose ball.

North End then went on to win and picked the perfect occasion to score their first victory against Birmingham this season after three previous defeats.
Today is also USA international and former PNE player Eddie Lewis’ 36th birthday. One of a select few Americans to play for PNE, the left winger was signed by Craig Brown in 2002, moving north from Fulham.
The last of his 124 appearances, which brought him 16 goals, came in the 2005 Play-Off Final defeat to West Ham United.
On this date 73 years ago, we ended our first post-war season at Aston Villa, on this date in 1947, losing 4-2 to finish seventh in the first division.
Tom Finney ended his first full season with 34 appearances and eight goals to his name as league football re-emerged from a seven-year hiatus.