A Foot In Both Camps: Jayden Stockley

Ahead of Tuesday night's trip to Bournemouth, we sat down with Jayden Stockley who spent 15 years with the Cherries and he is thoroughly looking forward to making his first trip back to the Vitality Stadium.

Normally, it is the turn of a former player of both clubs to sit down and preview the clash between his previous employees, but there are very few players to don the cherry and black of AFC Bournemouth and the lilywhite of Preston North End. 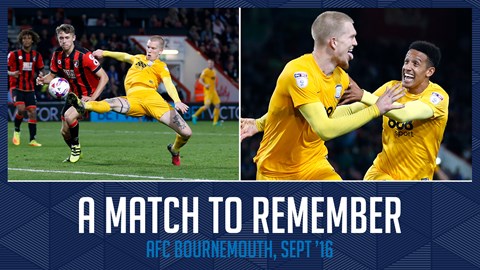 However, we do have one player in the current squad, who spent 15 years with the Cherries and who is thoroughly looking forward to making his first trip back to the Vitality Stadium on Tuesday night in forward Jayden Stockley.

Speaking to iFollow PNE to look ahead to the clash with his former team-mate Jason’s Tindall’s side, the frontman was excited at the prospect of returning to where it all started for him.

“It was a great time for me,” recalled the North End No.20. “I was there from about the age of seven-years-old and I saw the club go through everything they have been through.

“It was a good place for me to learn my trade and this will be the first time I have been back since I have been a professional. I left when I was 22 and I am really looking forward to going back, as I have some good friends down there.

“I made my debut when I still in Year 11. I pulled out on a Tuesday, which I was buzzing about, as I probably had triple science that day! It was a strange time at Bournemouth as they had the embargo going on and it was me and Jason Tindall, who is now the manager, on the bench!

“It was a crazy time and one that I look back on very fondly and I am proud to have represented the club, especially being from there.”

Those 15 years saw the club go through almost everything off the pitch, with financial struggles, then the takeover and ultimately the climb to the top tier, allowing Jayden to see it all.

“It was largely down to the work that Eddie [Howe] and Jase did that got them to where they are today – it was fantastic. They had the investment, which helped – you saw their team in League One with the likes of Matt Ritchie and Lewis Grabban.

“For players like me the rise bypassed you a bit, but it was great to see the likes of Steve Cook and Simon Francis, who are good friends, have the careers that they have had due to that success.”

The change from Eddie Howe to Tindall during the summer will have been a smooth transition, but the striker believes the new man at the helm will also have made some changes as well.

“We will expect something different. Jason was always a bubbly character when I was there. He was always someone the players could speak to – a go between between the manager and the players.

“He was a massive part of the club’s journey and I am sure he is using experience he has gained under Eddie and he has also brought in his own staff. He has Stephen Purches who has been there a long time and he has brought in Graeme Jones.

“We are going to come up against a team with new ideas and also has quality players, as the previous manager had as well,” he added.

There’s loads more from Jayden, as he reflects on the return of fans, the weekend’s game at Watford and more – just click on the video at the top of the page.

You can watch Tuesday’s game live on iFollow PNE, with coverage beginning from 7.15pm – Guy Clarke is on commentary duties and you can click here now to book a match pass for just £10.