PNE are back on the road this weekend as Alex Neil’s side travel to Rotherham United and there was only ever one man who we were going to catch up with ahead of this one – Chris Sedgwick.

The former midfielder made over 500 combined appearances for the two clubs, having joined the Lilywhites from their weekend opposition back in 2004.

Still living in Yorkshire and having close connections with the Millers, Sedge was able to offer an insight on what PNE can expect come Saturday afternoon.

He told iFollow PNE: “They’ve got a really good team. I’m quite close with [Paul] Warne and Richie Barker who are manager and assistant manager there and one thing they demand is a fit team who work hard.

“I watched them against Sheffield Wednesday last week and they really battered them. Against reading they lost 3-0 but played really well, so they’ve got some really good players, it’s just a case of whether they can do it week in week out. Obviously they’ve got some new to the Championship.

“It’ll be a tough game for North End and it’s one of them games that could go either way.

“I think there’ll definitely be goals in there because I know Rotherham like to try and open things up on the attack and they’ve got some pace in there as well.

“With no fans in there, games are getting so hard to predict at the minute so I know I’m sitting on the fence here a little bit, but it could go either way. When you look at North End’s form at the minute you’d like to say away from home they’d be favourites but it all goes out the window at the minute.”

Chris came through the Academy with Rotherham, joining at the age of 15 and going on to make his first team debut just two years later, and a move materialised to PR1 after seven successful seasons with the Millers.

“It was [a tough decision to leave] because I’d just signed a new three-year deal, but unbeknown to me the club were having a lot of financial problems at the time.

“I was kind of living in a bubble at that time; I’d come in straight from school, I’d got straight into the first team and was still living near family and friends. I wasn’t actively looking to move although I knew I probably should be doing to further my career and it kind of all came out of the blue.

“It was Preston, Sheffield United and Stoke who all had bids accepted around the same time so it was a bit of a bolt from the blue. We were playing Watford away and for some reason they told me before the game they’d accepted a bid and still asked me to play, and my head was absolutely all over the place. 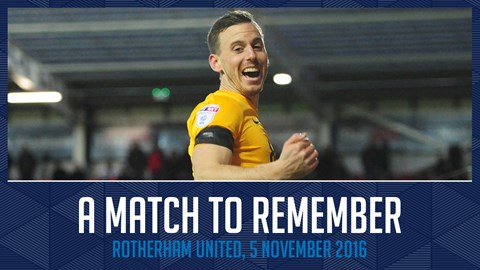 “I remember coming back to Millmoor to get my medical records because I was meeting thee on the Monday morning and I had tears coming down my face as I was walking out because I knew it was kind of the end of an era really, but it turned out to be one of the best things that happened.”

Sedge joined PNE in November of 2004 and walked straight into a team pushing for promotion, something which he got accustomed to during his time at Deepdale.

He played his part in three Play-Off campaigns with the Lilywhites and he agreed with Richard Cresswell, who told us a few weeks ago that the 2004/05 side who fell just short at the Play-Off final were the best side in history to not be promoted to the Premier League.

“I just think if the season had gone on a little bit longer, the form that we were in, we’d have got automatics but I think probably if Billy had his chance again he might have done things differently in the Play-Offs and as players we might have.

“It just looked like one game too much for us in the end and I don’t know if the day got to us, but the team was brilliant.

“I was looking forward to going into training every day and you did because even when we went behind in games, you knew that we were fitter, we were stronger and we were good players and we were going to come back and win.”

Sedge was also part of the remarkable end of season push in the 2008/09 campaign which saw PNE make up ground on the top six against all the odds and break into the Play-Offs on the final day.

“It was crazy,” he recollected. “We actually started the season really well, we started like a house on fire and then we had a bit of a dip in October/November time which left us with a lot to catch up and I think we kind of got back in there and then we lost against Blackpool and I think we all thought it was done.

“But we had games coming thick and fast and we managed some good results, obviously the Cardiff result was a phenomenal result in the end because the swing that happened in that game ended up with us getting in there.

“I saw a clip last week when Ledge [Sean St. Ledger] scores against QPR and everyone goes crazy; it’s nuts to think that we actually did that and got in there.”

One thing that always went in North End’s favour during that era was the closeness of the group, something which Sedge says remains to this day.
“That dressing room that we had going through we still see each other quite a lot, we still speak a lot.

“I’ve been on holiday with Lonners [Andy Lonergan] for the last ten years and his family and I still see Parky [Jon Parkin] a lot and Browney [Chris Brown].

“We all kind of stay in touch and meet regularly, that doesn’t happen very often so it shows what kind of a special group we had at the time.”

There’s loads more from Chris in his full interview with iFollow PNE in the video which will be available very soon as he speaks in depth about his time at Deepdale working under the likes of Billy Davies and Alan Irvine.

You can watch Saturday’s game from the New York Stadium on iFollow PNE, as the Lilywhites chase a fifth straight away win against Paul Warne’s Rotherham United and we will have to guests joining commentator Jonathan Breeze on air, with Andrew Lonergan on co-commentary, plus our interviewee here, Chris Sedgwick, bringing his views both pre-match and at half-time.