Alex Neil was disappointed with the two goals Preston North End conceded as their five-game unbeaten record on the road was halted with a 2-1 defeat against Rotherham United.

Alex Neil was disappointed with the two goals Preston North End conceded as their five-game unbeaten record on the road was halted with a 2-1 defeat against Rotherham United. 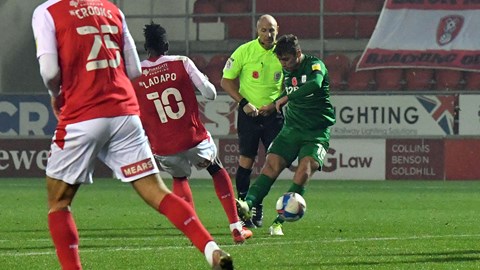 All the goals came in the second half, and the visitors looked good value for a point and potentially more when Ryan Ledson’s equaliser – following Richard Wood’s opener – saw North End pressing for a winner, only to see Matt Crooks net decisively at the other end.

While North End were the side in the ascendancy late on the manager felt there was a lack of composure from his side in the final third to make another breakthrough.

“I think that both goals we’ve conceded have been cheap,” Alex told iFollow PNE. “We lose our header on the first one, don’t pick up the second ball and concede. After that, you’re always worried because it’s difficult to break Rotherham down.

“We had the best chance of the first half, DJ is one-on-one with the goalkeeper, you probably expect him to do a bit better in terms of testing him.

“I thought it was always going to be a bit of a fight and a scrap; every game I’ve seen here has been the exact same, regardless of who’s came here. You need to limit mistakes against these types of teams and just do the basics really well and then hopefully your quality comes out in the end.

“I didn’t think when the ball went forward it stuck enough first half. Then in the second half, once we do concede, I thought we then took a little bit of a grip of the game, had a decent couple of opportunities. The first goal for instance; we bring Gally on to add a bit of quality to us, he puts a corner in, it lands to Ryan which gets us back in the game.

“We then have one where he switches it out to Alan Browne, cuts it back to Tommy B, he miskicks it and then we have the one where he puts it on Jayden’s head, who is unfortunate not to score. If he hits it any side of the goalkeeper, it’s probably going in the net.”

The manager added that the Lilywhites’ quality needed to shine through to get a result this afternoon as they faced a battling Millers side. 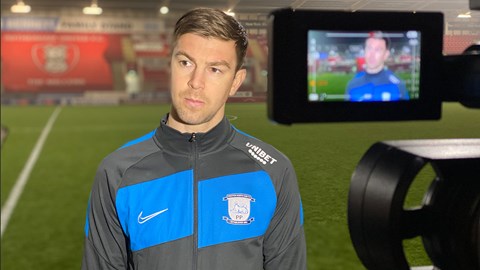 Hunts Determined To Regroup And Improve

“I think my biggest frustration is the fact that coming here, what Rotherham set out to do is to frustrate you – get in your face, make it difficult, make it tough – and they do that and they do it really well.

“The reason they lost other games is the moment of quality from the opposition and we had the opportunities to show those moments of quality. In the middle of the pitch, Ryan Ledson was probably the only one that showed a bit of composure for me and picked a couple of decent passes for us and he shows that composure with his strike for the goal.

“Gally added that when he came on and it’s no surprise that the opportunities we did score or create came from those two. Other than that, we just didn’t move the ball well enough.

“You need seven or eight of your players to play well, I didn’t think we had anywhere near that tonight. Against Reading we had eleven players playing well. The disappointing thing is you want to then try to back that win up with another win or certainly another good performance and tonight it’s so frustrating.

“I think the difficulty we’ve got at the moment is there’s two methods of playing that type of team; one is to roll your sleeves up, match that side and hope you’ve got better quality, which I do believe we have, or you open the pitch out, make the pitch big, try and pass it and hopefully try to play through their press. Today I thought we just lacked a bit of composure.”

Alex also felt small details in the lead-up to the hosts’ winner exemplified how snap moments can prove decisive in the Championship.

“The second goal summed it up; we look as if the momentum’s going our way, we’re on top of the game, we look as if we’re going to try to win it, and then we pass the ball to them and they break and they get the goal.

“It’s not meant, we’ve obviously tried to pass it to our player, but they’re the moments in games that either win or cost you games and unfortunately that opportunity cost us.

“Their two goals are the two chances they had and then they had one literally with about 30 seconds remaining because we’d flung everybody up the pitch.”

Watch the full interview with Alex on iFollow PNE.