Preston North End manager Alex Neil feels that Reading have found a good balance this season after their impressive start to the 2020/21 season.

Preston North End manager Alex Neil feels that Reading have found a good balance this season after their impressive start to the 2020/21 season.

The Royal started the season extremely well under Veljko Paunović, winning seven and drawing one of their opening nine games, only losing for the first time, last time out, against Coventry City at St Andrews on Friday night.

And Alex has said they have taken their opportunities when they have come along; as illustrated early on at Blackburn last Tuesday, when the North End boss saw them in person.

“They will be delighted how they have started,” he told iFollow PNE. “In the game I was at last week, they couldn’t have had a better start [at Blackburn] – they scored a goal after about seven seconds!

“The best was I could describe them in the game is ‘clinical’. They got three shots at goal and scored three goals, but in that first 20-minute spell, they were dangerous.

“They have good players at the top end of the pitch; they risk the ball; they move the ball well and, like most teams in the league, they are a threat.”

The gaffer feels that the quality has always been in the squad at the Madejski Stadium and that Paunović has found the best way of getting the best out of the group.

“They have needed to get balance in the team,” he continued. “The one thing you can always do is to fit as many of your best players in your team as you can, but that is not always your best team.

“Sometimes you have to sink out one or two of your best players to get the best balance and equally, some of the players need a bit of time. They have good players, they are a danger and it will be a tough game – but they all are, for different reasons.” 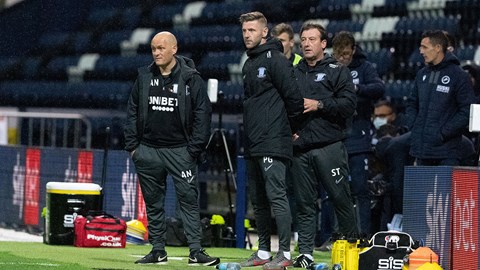 One player who has flourished, is striker Lucas João, who has scored six goals in the first nine games: “He is probably more of a target now than what he used to be; but the one trait that he has, which is always concerning, is that you can feed the ball into his feet and he can turn and wriggle away from people,” Alex said of the Royals’ No.18.

“His goal against Coventry summed things up; to took the ball in 35 yards from goal, turned and he wriggled away from a couple of players and banged it with his weaker foot. When players have that sort of quality, they are always a threat.

“They have always had a good group of individuals and what they have managed to do this is, is to structure that in a way that has allowed them to go and show what they can do.

“That has probably been an issue for them over the last couple of seasons, but, as we saw in the last game that they played, they do concede goals and Coventry managed to beat them.

“We are such a strange team at the moment, in that we can go anywhere and win and we have already shown that against Brentford, QPR and Huddersfield, who are good sides and we just want to get that element of consistency now.”

Whilst Reading may be viewed as an open and expansive team, as they have shown against Rotherham and – in parts – Blackburn, they can also get in their shape and defend when required.

“Blackburn totally dominated the ball. Reading started really well; got the goals they needed and then were happy to sit in their shape and hit them in transition.

“The first goal is going to be important – as it always is – and we just need to make sure we start the game well and do what we have been doing away from home,” added the PNE boss.

You can watch the full game from the Madejski Stadium live on iFollow PNE. The game is a 7pm kick-off and we will be live with Guy Clarke and Paul Sparrow from approximately 6.45pm, bringing you all the action – click here now to buy a match pass.