Dana de Oliveira Amaral has insisted there is plenty of room for improvement for Preston North End U18s after they narrowly lost 3-2 against local rivals Bolton Wanderers.

The first year scholar came off the bench after 65 minutes, playing his part in a late fightback that saw the young Lilywhites move to within one goal of levelling the contest, but they couldn’t find another to secure a point.

Speaking to PNE.com after the game, Amaral said: “We didn’t get off to the best start in the first half, I thought some of our play was quite slow and sloppy but when the second half started we began to show more of what we could do as our tempo of play improved.

Amaral was brought on with the score line at 2-1, replacing midfielder Aaron Bennett, and he was straight into the action, helping to link the defence and attack while looking to give PNE a way back into the game. 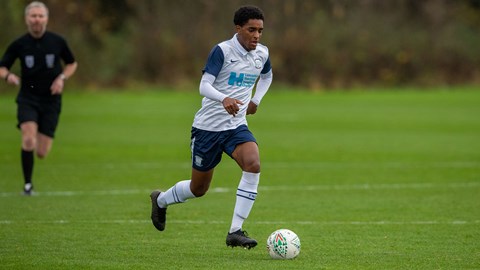 Speaking on his own display, he added: “I feel like I had a good impact, I was always trying to get the team to play forward as much as I could.

“I was always trying to win the first and second balls for the team and give my all, but ultimately there is always plenty of room for improvement.”

Dana has also called for togetherness within the squad as they look ahead to their next game against Lincoln City in the FA Youth Cup.

“As a team we need to work more on being more compact and limiting chances for the opposition, but that will come as working together as part of a team.

“We can’t be getting too disheartened by this result as we have a big game coming up against Lincoln City that now has our full attention.”

Read more about the FA Youth Cup third round draw by clicking here.