Ben Dooley said that PNE U18s ‘fought hard’ and ‘were up to the challenge’ in their North West Youth Alliance victory over Salford City. 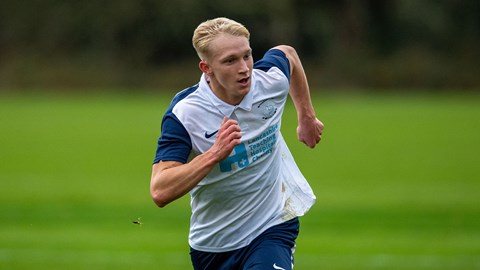 The youth side defeated the Ammies 2-1 in a wet and windy contest at UCLan Sports Arena to make it back-to-back wins and four from four in the league at home.

The conditions presented the young Lilywhites with a difficult challenge, but one that midfielder Dooley felt they dealt with maturely.

“We knew that the game was going to be physical and strong, so in training, we’d been working on second balls, winning battles and showing real grit and determination for a win,” he commented.

“The weather obviously didn’t really help us, but I don’t think we saw that as a weakness, we coped with that very well.

“We fought hard, we won our battles like we said we would and the lads were great, they were up to the challenge and in the end we overcame it and saw the win out.”

An early opener from Vaughn Green coupled with Josh Seary’s second half finish put PNE in a commanding position, but the visitors pulled a goal back with just over ten minutes to play.

The late consolation meant that the youth side didn’t pick up a third clean sheet of the season that they have been searching for in recent weeks, which was a negative in an otherwise mostly positive performance for Dooley.

The 18-year-old said: “I think we switched off a little bit and lost concentration which caused them to go up and score.

“We needed to be more switched on and see the game out properly and make sure that everything was still organised and done right.

“It was a bit disappointing because we don’t like to concede and that’s what we work on, but we’ve got a lot of things to work on still as the season goes on and progresses.”

The second year scholar has been given the captain’s armband in recent weeks by Academy manager Nick Harrison, and Dooley believes the role hasn’t changed how he is on the pitch.

“For me, the armband is just material, I don’t think I am different once I have it on.

“We’re still a team, we’re still a unit and I think the for me it doesn’t really matter, but of course I’m happy to be shown as a leader and as captain of the team.”