Jacob Holland-Wilkinson was full of praise for the ‘dominant’ youth side performance in their win against Shrewsbury Town. 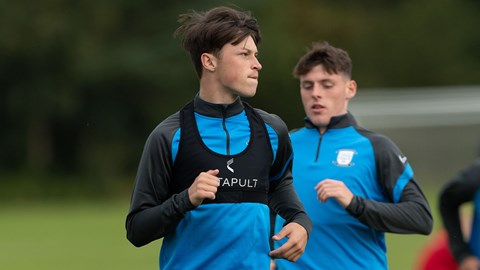 The U18s ran out 2-1 victors over The Shrews in the North West Youth Alliance league thanks to goals from Aaron Bennett and Josh Seary.

Holland-Wilkinson returned to the starting line-up after a loan spell at Lancaster City, and the forward was impressed with the way the young Lilywhites controlled the game.

“I thought we did really well; we were dominant in midfield from the get-go and it was a game that we all needed to battle and we knew that, and we did that really well,” he commented.

“We took the chances for the goals well but we had a few more chances that we should’ve taken, and they’re the learning curves that we’ll take out of the game and into training and improve on.”

The 18-year-old was unfortunate to not add to his goalscoring form from his time at Lancaster, where he bagged two goals in five appearances, when he struck the post with a low shot in the second half of Saturday morning’s game.

His time at the Dollies was the second work experience spell of the season for the youngster, having already spent a month at Kendal Town, and he feels the experience has proved to be very valuable.

He said: “I’ve really enjoyed the step-up to men’s football, I loved every minute at Lancaster, and I’ve took a lot of out of it.

“Playing with men you can tell the physicality level is completely different – they’re a lot older and a lot stronger.

“I’ve learnt more about how to ride players and how to get past them easier and that’s the biggest lesson I’ve gained so far.”

The U18s had been without a win in three heading into the game, having been defeated by Bolton and drawing with Doncaster in the Youth Alliance Cup, and playing out a 5-5 thriller with Port Vale in the league too.

Holland-Wilkinson emphasised the significance of momentum as the side returned to winning ways.

“We’ve got the FA Youth Cup coming up soon, so the more games we win the better the confidence is in the team, the better the spirit is, so it’s definitely important to keep winning now.”

Stay up-to-date with the U18s by following @pnefcacademy on Twitter.