Frankie McAvoy said he was delighted after Preston North End claimed their first home win of the season in the Championship with a 1-0 triumph over Sheffield Wednesday.

Frankie McAvoy said he was delighted after Preston North End claimed their first home win of the season in the Championship with a 1-0 triumph over Sheffield Wednesday. 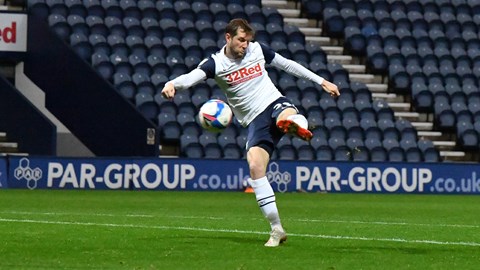 Tom Barkhuizen struck the winner within minutes of the second half restart with a stunning effort from the edge of the area and the assistant manager felt that match-winning strike was a deserving one for the Lilywhites.

Speaking to iFollow PNE after the game, Frankie said: “It’s down to the manager and the players, it’s to do with everybody in terms of the backroom team as well. We’re just delighted to get the win.

“Sometimes it is difficult when teams go down to ten men, it’s not easy to break them down, and particularly a Tony Pulis team, they’re always well organised. I thought he got a back five and a three in front of that and it was tough to break down; sometimes it’s not easy.

“Credit to the manager and the players at half-time, we changed it and went two up top, went with two wing backs and three at the back for us and that helped us.

“The changes coming in, Paul Gallagher coming in and getting on the ball, a calming influence at times for you, and that really helps when you’re playing against ten men as well to try to create those clear-cut opportunities. We’re happy, happy with the win.”

Frankie was just as pleased with Barkhuizen’s 48th-minute strike which proved decisive, and revealed he and North End’s No.29 had discussed him getting on the scoresheet earlier in the week in training.

“It was excellent and to be fair I actually said to him yesterday at training, just watching how he was striking the ball and his finishing. I said, ‘I feel good for you for a goal tomorrow’, and he said, ‘I hope so’, I said, ‘I hope so too!’ It’s funny how things work out.

“It’s a sweet strike and it’s a goal in my opinion that’s worthy to win any game so we’re delighted with that.

“We deserved to win the game, we totally controlled the game in the second half and our task was to try to get the second goal to kill it, because you know the longer the game goes on and teams only losing 1-0 can start to throw things forward, put things into the box, make it tough for you, make it hard. I thought we defended our box reasonably well.”

While pleased to register a first home win of the season, McAvoy pointed out how the Lilywhites had been in great form across both home and away games of late, while looking ahead to the Lancashire derby against Blackburn Rovers at Deepdale on Tuesday night.

“I think that’s four in seven we’ve won. Sometimes people just look at your home form and people then look at your away form, but it can be pressure on you in terms of trying to get that monkey off your back and get your first win at home.

“It was good today and a new introduction to the crowd noise at the back of us was good, I enjoyed that and I think the players enjoyed that as well. All in all, happy with the three points and we need to just look onto the next game; Blackburn Rovers at home.

“Everybody that’s involved with football is missing the fans, the game’s different when fans aren’t here, and at Preston, particularly when you play Blackburn, it’s magnificent and the fans are great. That sort of spurs us on.

“The last game here we were 2-0 down and we came back and won the game 3-2. A lot of that was down to the fans just driving you forwards and it makes a big difference for us. Hopefully we don’t need them on Tuesday night and we can pick up another three points at home.”