Saturday’s match-winner Tom Barkhuizen is the cover star of Tuesday’s edition of the matchday programme as he looks to continue his fantastic record in derby games. 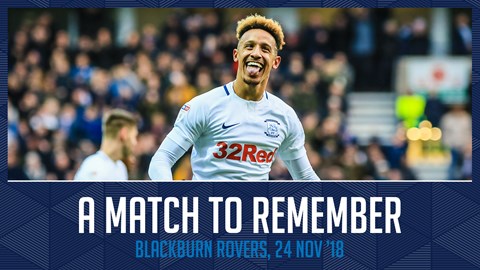 Speaking to The One And Only, the 27-year-old admitted he was looking forward to the game, due to his excellent goalscoring record against the Lilywhites’ local rivals.

“I have scored four goals in the last five games I have played against Blackburn,” said Tom.

“My record says I like playing against them, I also have a good record in derbies against Bolton and Wigan as well, but I don’t think there is anything in it, I think it is just a coincidence.

“Last year’s game against Blackburn at Deepdale was one of the best matches of the season in terms of result and atmosphere. Hopefully we will get a good result today, but it will be without the atmosphere, sadly.

“They have been quite similar to us, they have been a bit up and down so far this season, so it should make for an interesting game.”

Tom isn’t the only one with a good record against Rovers and we have extended interviews in this seventh edition of the programme this season with former players Callum Robinson and Alex Bruce.

We also have interviews with Patrick Bauer, Tom Bayliss and Brian Mooney, amongst all the usual features and loads and loads of fantastic photos from our club photographer Ian Robinson.