We caught up with Mick Rathbone this week – a man who will certainly be taking a big interest in Saturday’s fixture between Preston North End and Birmingham City given his history with the two. 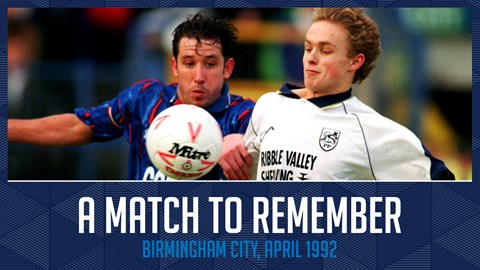 ‘Baz’ has Saturday’s opposition to thank for his pathway into professional football, as they handed him his debut in 1976, and he would then go on to join PNE just over ten years later in 1987.

The defender, who now works as Head of Rehabilitation at Everton Academy, grew up supporting Birmingham and still has a soft spot for them to this day.

He told PNE.Com: “Everyone’s got their club, a club where they see that badge and it’s a special team and Birmingham’s still mine.

“I didn’t enjoy it there and I had a really difficult time as a young lad coming up, mainly my own fault, but it’s still my club. I still look for the results and I worked with Aitor Karanka for six months at Forest and we’ve become really good friends, so since he went there, I’ve had more interest.

“But that badge on Birmingham’s shirt, that’s the badge that gives me a tingle even after all these years. It’s the club I supported as a kid and had pictures on the wall of my bedroom.

“I remember going to watch play probably in the late 60s when a young player called Trevor Francis was getting into the team, then I joined them and it didn’t happen for me there but it is my club Birmingham.”

Francis, who would go on to become something of a legend with Blues, will always be remembered by PNE supporters for being in charge of Birmingham City in the 2000/01 Play-Off campaign.

The second leg of that tie gave North End fans one of the most memorable nights in Deepdale history with Mark Rankine scoring a late equaliser before David Moyes’ side came out on top in the penalty shootout.

Rathbone said: “By this time I’d been at Preston as a physio for six years and I absolutely adored PNE. I’d played for them as well so while Birmingham was still the badge that gave me the nostalgia of being a child almost, I was Preston through and through, and still am in many ways, so that game was all about us winning.

“My recollection is that Ranks [Mark Rankine] had a sore hamstring, didn’t play in the first game and I advised he didn’t play. Ranks was annoyed with me and the manager was on at me and I said ‘keep him fit for the second game and he’ll score the winner’. It wasn’t quite the winner, but how prophetic that was!

“So, I had Ranks and the gaffer grumbling away at me for three or four days, we got beat 1-0 at their place and then we won 2-1 in the second game and Ranks got the clincher and it went to pens – the rest is Preston history.

“Funny story is, in the afternoon Brian Hickson (kitman) was there all day preparing for the game and Jasper Carrott came in and put a load of champagne in their dressing room.

“Brian was like ‘hang on Jasper, you’re not there yet’ and he was thumbs up ‘no problem mate’ and then after the game Brian was shouting ‘cheers, can we have your champagne now’ so that’s kind of the thing that sticks in your mind.

“I’ve had so many great days at Preston, at Everton, with the England teams, my year at Forest was amazing and I loved that and now being back at Everton, but that’s up there as one of the top ten nights in my life.”

During his time as a player in PR1, Rathbone worked under John McGrath and he had plenty of praise for the manager who got the club out of the bottom tier of English football in the late 80s.

“He was unbelievable,” Mick explained. “He didn’t fine players, he said ‘I’m not taking the money out of your children’s mouths and your wife’s mouth. If you do something wrong here, you’ll stay back and you’ll sweep the floor, I’m not robbing your kids of money.’

“There was a lad called Gary Walker who was a local lad – he didn’t really make the team but he was a strong centre half, like me, athletic. One day John McGrath says to him in the meeting he says ‘son you have got the strength of a shire horse, you’ve got the speed of a racehorse, but sadly son, you’ve got the brains of a rocking horse’.

“Every day was something like that – he was unbelievable, what an absolute joy to be around.”

Having spent time with Birmingham City boss Aitor Karanka during his time at Nottingham Forest, Mick gave us a bit of insight into what PNE can expect this Saturday.

“The funny thing was at the end of the season he said ‘Baz come on, one more year’ and I said ‘Aitor I can’t I’ve got to go back to my wife’. He goes ‘okay then you make me one promise now, you promise me when I get my next club you come and work for me’ and I promised and he said ‘I’ll hold you to that’.

“The funny thing is, that club’s now Birmingham City and that is my club so I’m kind of half expecting, praying, dreading that phone call; it’ll be the perfect epilogue to my career.”

You can watch the game live on iFollow from 2.45pm, with match passes available for £10 - just click here now to sign up.