A Foot In Both Camps: Sean St Ledger

The Republic of Ireland centre half will never be forgotten in PR1 for his involvement in the 2008/09 season when his header at Deepdale earned his side a place in the Play-Offs on the final day of the campaign.

“Obviously at the end of my spell there was a bit of a period where Preston struggled and found themselves getting relegated, but now again under Alex Neil they’re always in and around the Play-Offs and it’s now about trying to make that final step and get themselves into the Play-Offs.

“But I think the Championship is the same as it always is – it’s always very tight. There’s always a bunch of teams, always the ones that are just fighting it out for that last Play-Off spot.”

North End face Gary Rowett’s Millwall on Wednesday evening in a 7pm kick-off before returning to base on Saturday afternoon for the visit of Birmingham City.

Looking ahead to those two fixtures, St Ledger previewed the opposition and he thinks that PNE’s ability to change shape in the past few matches could stand them in good stead going into the double header.

He said: “If you look at both managers, Gary Rowett has been very successful in the Championship and with Millwall lying seventh in the league you would imagine that they’ll go on and continue that and have a good season, they’re always very organised.

“Even more so now with [Aitor] Karanka at Birmingham, they’re very well organised, difficult to break down and play that low block so this is the period when you need your inventive and creative players to produce something special, whether it’s a shot from distance or to be able to penetrate from a deeper position.

“Preston have the players and I think they have the flexibility. I was reading that they started off in a 4-2-3-1 and changed it at the weekend to a 3-4-3 so that’s fantastic to have. 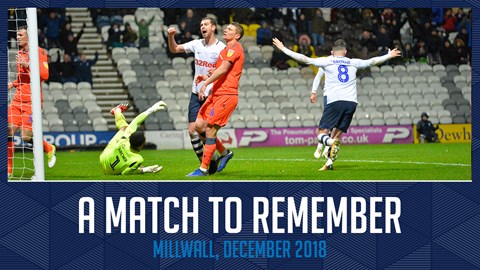 “Sometimes you can keep opposition guessing, and so when you come to a Saturday the opposition players might not know their roles and responsibilities because of the versatility of the Preston team which is an added bonus.”

Wednesday’s fixture will be shown live on iFollow PNE, but will be another fixture inside an empty stadium and Ledge can’t wait to see supporters back inside.

“I would love to make a little return to Deepdale,” added Sean. “I always enjoy coming back there, the people are very welcoming and warming.

“I just feel for the fans who look forward to a Saturday and a Tuesday under the lights at Deepdale. I’ve said previously that they were some of my favourite times playing in night games at Deepdale.

“It’s important for football fans to be back in there and I think that this period without them will actually be good for the people who work in football because I think it’s made them realise how important the fans are to the game.

“I know there’s that old saying that without fans football’s nothing and I truly believe that. This has been really evident in this period without them.”

There’s plenty more from Sean in the full interview above as he discusses PNE’s home form, the Irish connections within the squad and much more – just click on the video above.

You can watch Wednesday night’s game live on iFollow, with the show – for the 7pm kick-off – beginning at 6.45pm with Jonathan Breeze and, Ledge’s former captain, Paul McKenna on commentary duties – click here now to sign up for a match pass.