We go back 30 years in our latest look back to memorable matches from the past against our latest opponent.

And this trip to Leeds Road in 1990 proved a profitable one for the Lilywhites, even without a recognised striker in the side!

It was April and the game saw North End record their first clean sheet since the previous May!

Inspired by the true-grit of skipper Warren Joyce, PNE put in a performance that belied their status as a team scrambling for third division survival with the worst away record in the division.

They displayed a real appetite from the off and Huddersfield were blown away in a first half that brought both goals and other anxious moments for the home rearguard.

With Graham Shaw ruled out with a back injury, John Thomas out with a hamstring strain and Nigel Greenwood taken ill at the last minute, centre half Adrian Hughes and the transfer-listed Ian Bogie were chosen to lead the line, with Bob Atkins – another defender – replacing Steve Harper in midfield.

The line-up might not have promised much, but it certainly delivered. It may have been even better as early on Peter With appeared to handle in the box after Hughes had a header ruled out, but despite the claims of the team and the 500-strong away following, nothing was given. 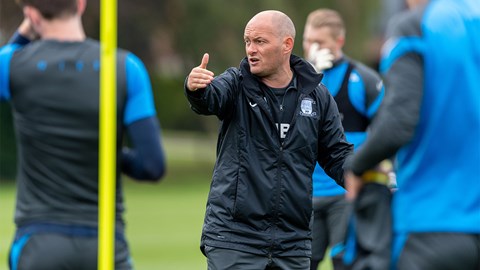 The deadlock was broken on the half hour mark as Sammy McIlroy and Gary Swann combined with some intricate build-up play and Joyce reacted to toe-poke a shot past Lee Martin, for his tenth goal of the season and his third in two games.

Huddersfield, whose only goal-bound shot in the first half came from Aidy Boothroyd – which brought a safe catch from Alan Kelly – were rocking and McIlroy took full advantage with a superb pass in the 38th minute to set up the second and decisive goal.

His inch-perfect pass found Bogie’s run and he unleashed a tremendous right-foot shot which screamed home from well outside the penalty areas.

After the interval the hosts abandoned their sweeper system and PNE had to be defensively strong; Swann making a fine block from Mick Byrne, but they worked hard and Mike Flynn and Jeff Wrightson looked solid, winning every challenge at the back, as the side took an important three-points.