As ever, Preston North End captain Alan Browne was honest in his assessment of the Lilywhites’ match against Birmingham City at Deepdale.

As ever, Preston North End captain Alan Browne was honest in his assessment of the Lilywhites’ match against Birmingham City at Deepdale. 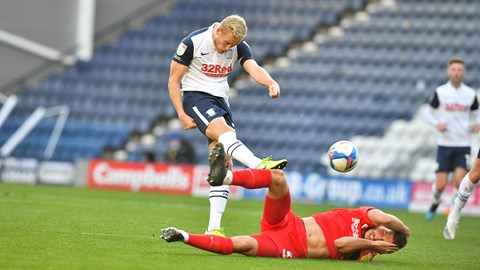 Aitor Karanka’s men took the points with Gary Gardner’s late header, after Jayden Stockley’s stunning 30-yard strike midway through the first half had levelled after Aussie Riley McGree’s early goal for the visitors.

And the Irish No.8 admitted said afterwards that it was ‘not good enough’. He told iFollow PNE: “I just feel miserable, we just can’t win a game at home. We don’t why that is, I don’t think there’s been much in the games, but I’ve missed two great chances today, there were other chances that have come our way and they’re just going begging and it’s been the story of our season at home so far.

“We know that but we’re trying everything we can to fix it and hopefully it will come good sooner rather than later.

“The fans probably aren’t happy, which is rightly so. We’re the ones who take the criticism, we’re the ones who go home and repeat scenarios in our heads over and over and it hurts, especially at this stage of the season when we want to be up there challenging and we’re just losing out, but by fine margins.

“That’s been the story of the season and we need to figure out a solution as quickly as possible.”

The international was very self-reflective and critical of himself, despite another performance where he led by example.

“The first two minutes, you’re thinking, ‘here we go again’,” he continued. “Conceding a goal at two minutes is shocking at any standard.

“Jayden’s goal is an absolute worldie and at that stage, that was probably the only thing that would have got us back in the game and it did and I think we were on top probably for the rest of the game from that point on.

“We just didn’t take our chances, especially me, I missed two fantastic chances and it’s just not good enough and then they punish us at the other end and that’s what you get.”

There were good chances for PNE to get ahead in the game and also to draw level at the end, Neil Etheridge in the visitors’ goal in excellent form on the day and ‘Brownie’ felt that was representative of their current luck at Deepdale.

“He made some really good saves, but I still think we had enough to win the game.

“Mine are terrible my chances, but Barky does well to get his shot, it’s a fantastic strike and on another day that goes in the top corner and we’re back in the game.

“That probably just sums up our luck at the moment, the ’keeper making a worldie save like that, and denying us anything from the game.”

With two away games this week, the chance to immediately respond is something Alan is welcoming of: “I usually wouldn’t think that’s the case, but at the moment, our away form is saving us and it’s probably a good thing that we stay away from here for a while and try to accumulate as many points on the road as we can because unless we turn our form around at home, we’re going to find ourselves in a really awkward position and you don’t want it to get to that stage.

“We want to be competing right at the top, so we’re obviously massively disappointed with our home form, and it’s something that’s down to us to fix it,” he added.