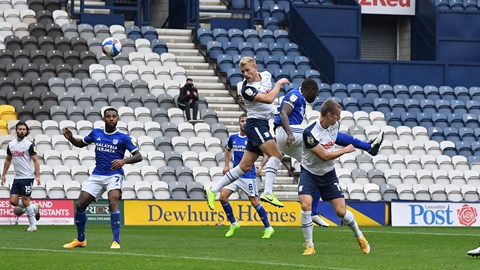 Sheyi Ojo’s early second half strike was enough to give Neil Harris’ men the three points in a game that was short on clear cut opportunities for both sides.

“I don’t think there was much in the game at all,” Alex told iFollow PNE. “I didn’t think there were many chances for either team. It was a competitive match; it was very physical. We know we had to be in that battle.

“I thought we competed well, but the first goal was always going to make a massive difference.

“I thought it was going to be a 0-0 or a 1-0 game. I watched Cardiff’s game against Blackburn last week and it finished 0-0 and they are a hard team to play against.

“They are big, strong and physical and they have bought guys who are quality and who are going to be a danger, but our biggest frustration is that we played fine, there wasn’t a lot in the game, but we defended a transition poorly and that has cost us the match.”

The gaffer was asked about the effect of playing at home without the crowds, with only one home win in the whole 12 Championship fixtures this weekend, and he agreed it is a big loss to his side.

“Certainly, for us,” he continued. “I have spoken about it before – I really do think the crowd helps us at home.

“The lads feed off the momentum and feed off getting people on their feet, making good tackles and getting about the pitch and when that is not there, maybe a couple of per cent you could take further, you lose.

Browney: “A Draw Would Have Been Fair"

“I am not going to blame it on that; the simple fact is, we have to do better. We have to get the first goal more often.

“That has been an issue for us – we haven’t scored a goal at home so far, but then we went and scored four at Brentford – it is frustrating.”

The last 20 minutes saw a number of attacking options thrown on, but couldn’t get an equaliser and Alex says they must start to be on the positive side of tight games.

“We did create a really good chance - Ben Davies puts a great ball in and big Jayden [Stockley] is well-positioned, he just doesn’t get enough on his header.

“But that is one chance, we need to create more opportunities than that – it is just disappointing, because there is not a lot in it.

“We need to find ourselves on the right side of those narrow margins and at the moment we are not, which is frustrating and we have to try and make sure we win the next game,” he added.