Aaron Bennett said scoring a hattrick in the youth team’s 5-5 draw and playing a major role in their fightback from 5-2 down gave him and his team-mates a ‘good feeling’. 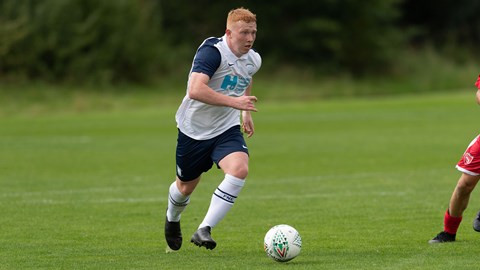 Bennett was directly involved in four of the young Lilywhites’ five goals on the day, which not only included three strikes of his own, but an assist for younger team-mate Noah Mawene’s dramatic 89th-minute equaliser.

After being part of a performance that required three equalisers for North End to claim a point, the 16-year-old midfielder admitted it was a strange game to play in.

“At 5-2, usually our heads might have gone down and we could have given up, but somehow we got better and better as the game wore on and luckily brought it back.

“We made a few substitutes and they came on and were playing well. We just went to another level then and started playing more.

“It was a good feeling seeing the fifth hit the back of the net. It’s good knowing that I passed it to him and having a say in the final goal. It was a good shot from Noah and it deserved to go in, we deserved that and we could have got all three points as well.”

The first year scholar felt North End might even have scored more, himself included, after opting to pass rather than shoot for a chance in stoppage time – adding that if he and his team-mates continue to make the right decisions more often than not in attack, then the goals will surely continue to flow.

“I had a chance at the end. I was unselfish enough to pass it across it goal when the right decision might have been to shoot and that could have won the game.

“If we all make the right decisions, goals will come easily and quickly for us and we’ll just keep scoring and scoring, which we need to do.”

Bennett confessed that scoring his hattrick was pleasing, but said his individual display gave him as much confidence as anything else.

He scored his first early on from the penalty spot, cancelling out Vale’s opener, before pulling back the Lilywhites’ third and fourth goals in the second half as they fought back from a three-goal deficit.

“It was good to get the goals. I thought I played well and helped the team.

“[The second goal] was a good feeling, I was the one that played it through to Lewis Leigh first and he returned the favour by playing it back across goal for me to get on the end of it.

“For the last one, no one was tracking me, I had a lot of grass to run into and luckily, I hit a good shot and it went in the bottom corner so I was happy about that.

“I feel confident in every game I play, but coming off the back of scoring a hattrick, I’ll just be willing to get more again.”

Bennett also feels he is reaping the rewards from extra work on the training pitch and having started the 2020/21 campaign strongly, he is relieved to be back playing in the admittedly strange circumstances.

“I’ve been doing extra. I thought if I did do that and I feel better in myself then I will perform better,” he added.

“I’ve been been working with Jake Atherton [fitness coach], he’s done a lot of work with me and helped me through the past couple of weeks, it’s been good to work with him and keep progressing.

“I’m just glad we’re back playing. Obviously, there are no parents or fans watching, but it’s better than nothing and just playing again back with your team, winning games and scoring goals, there’s no better feeling really.”

The youth team travel to Doncaster Rovers on Wednesday afternoon in the Youth Alliance Cup; follow @pnefcacademy on Twitter to stay up-to-date with all the latest events from the Preston North End Academy.