Emil Riis Jakobsen: “It Is A Dream Come True” 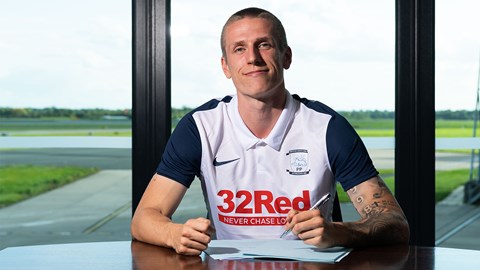 The Danish U21 international has just won the player of the month award for his former Danish Supaliga side Randers FC, after a blistering start to the 2020/21 campaign and is looking to bring that form to the Lilywhites.

Speaking to iFollow PNE after completing the paperwork on a four-year-deal, he said: “I hope I can help this team to score some goals – that is why I am here and what I want to do.

“I might look a big guy, but I would say I am pacey as well and I have a good shot and I like to score goals, so that is what I hope to do.

“I am very confident. I have scored a lot of goals lately, so that is a big confidence boost. Things are going well at the moment and I hope that will continue.”

The 22-year-old was thrilled with the transfer and admitted he hadn’t got much sleep ahead of his flight across from his homeland: “I am really excited,” he continued. “I am really looking forward to playing for this club, it is a dream come true for me.

“I saw the league table last year and I my aim is to win a lot of games and finish as high as possible.

“I haven’t got a lot of sleep, I have been really excited to come here and can’t wait to start to play, I am really looking forward to it.”

Having spent three years in England with Derby County as a youth team player, he hopes his previous experience of the country will stand him in good stead to hit the ground running.

“I know how it is to come into a team where you don’t know anyone; I moved away from the safety of Denmark [to join Derby County] and I know how it is and hopefully will benefit from that.

“I have never played in the Championship, so I will have to get to know the league, but knowing the country and knowing how everything works, I think that will have me.”

The new No.19 could make his debut, subject to international clearance, against Brentford this weekend, a club with plenty of Danish connections of its own and he says that he wants to make sure that he is the player with the bragging rights when he goes away on international duty with the U21s next week.

You can watch Emil and his new team-mates live on iFollow PNE this Sunday, kick-off 2pm, with Guy Clarke and former PNE defender Paul Sparrow on commentary duties - click here now to sign up for a match pass.