Vaughn Green is eager for more goals after getting off the mark for the youth side in their 2-2 Youth Alliance Cup draw at Doncaster Rovers. 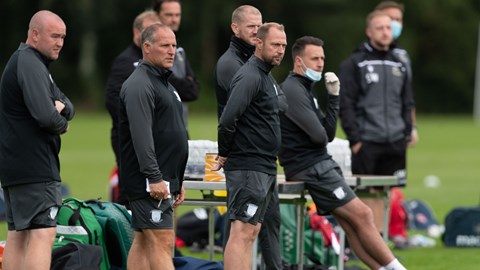 Green was a second half substitute in Wednesday afternoon’s game and netted his first goal of the season ten minutes after coming off the bench.

His strike levelled the game at 1-1, but the eventual draw unfortunately meant that the Lilywhites had not done enough to progress from cup competition.

The 16-year-old forward was pleased with his goal but is already focused on scoring the next.

He told PNE.com: “I was quite buzzed at the time and I stuck my hand up in celebration even though we just needed to get the ball back to kick-off again.

“When it went in, I thought ‘about time’ – I’ve done quite a lot of work for the team in the past few games but not actually got on the scoresheet, so it was kind of a feeling of ‘right, I’m off the mark, but now I need to get more and carry on’.”

Green watched the first half of the game from the side lines and was brought on shortly after the restart.

He revealed what Academy manager Nick Harrison and the coaches remarked to him as he made his entrance, saying: “It wasn’t a lot - they just said do your thing and make an impact.

“In my head I thought, ‘I’m going to have to be a bit selfish here’ because the pitch was small and we couldn’t really pass it about.

“I knew I needed to take a few shots off and hope one of them comes off, and the first one did.”

PNE lost their first group game in the cup 1-0 to Bolton Wanderers which had left them with an uphill task as they travelled to Yorkshire, with only one of the three teams progressing to the next stage.

Green said: “Going into it we kind of thought losing the first game had put us in a bad position so we all thought we need to win this and hope that Doncaster beat Bolton in a few weeks.

“When we came back in after the game it was very quiet, no music being played and the mood was just a bit negative.”

The first year scholar and his team-mates will be looking to bounce back when they take on Shrewsbury Town at home a week on Saturday.