Declan Rudd has paid tribute to his team-mates and targeted additional defensive shutouts after registering his 50th clean sheet for the club in the 2-0 away win against Queens Park Rangers.

Declan Rudd has paid tribute to his team-mates and targeted additional defensive shutouts after registering his 50th clean sheet for the club in the 2-0 away win against Queens Park Rangers. 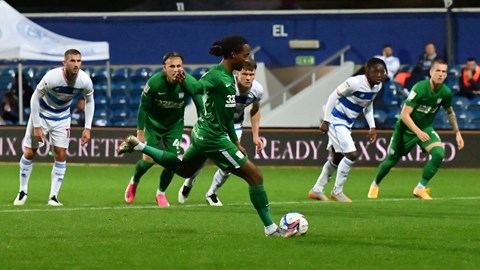 North End’s No.1 reached his half century for clean sheets with the Lilywhites after a relatively quiet night’s work at the Kiyan Prince Foundation Stadium, which saw two penalties at his opposite end scored by Daniel Johnson and Scott Sinclair.

Rudd’s involvement remained essential though with key interventions early and late in the contest, doing enough to put off Bright Osayi-Samuel at his feet in the first half, and proving an imposing figure in the way of Albert Adomah in stoppage time as he struck the post.

Speaking to iFollow PNE after collecting his 50th shutout, Rudd explained how he hopes the team can improve their defensive record, while expressing his delight with the quality throughout the squad following the midweek victory in the capital.

“I want to have more clean sheets, I don’t think I have enough, and as a team I don’t think we have enough for how hard we work,” said Dec. “We concede some goals that we should probably deal with a bit better.

“It’s my 50th but it’s also the team’s, without them defending from the front and putting their bodies on the line, we don’t keep the clean sheet, so credit has to go to them.

“If we keep a clean sheet, we usually get a penalty to win the game – today we got two, which was nice! We keep it shut at the back and we’ve got the quality in the team to score goals. That’s what we’ve done and we need to keep doing that now. One clean sheet needs to turn into two quickly because as a team we deserve more for how hard we work.”

The custodian was always confident of the right outcome from the spot as North End won two penalties on the night, and is also relishing the battle the forward players will face for a starting berth this term, particularly following Emil Riis’ arrival, who impressed on his full debut against the R’s.

“We’re lucky, we’ve got so much quality and composure as well. You look how the lads take the penalties and there’s no panic, you feel confident that they’re going to put it away and touch wood they do most times. We’re lucky we’ve got people in the team who can do that.

“It’s never easy coming into a team making your first start, especially playing as a lone striker, and he [Emil Riis] was brilliant. He’s come in and done everything we asked, it’s like he’s been here for a few years, all the jobs he was asked to, he’s done, and every ball that went up to him he made it so difficult for their defenders to get a good clearance, so even if he didn’t win it, it was just dropping into an area where we could pick up the second ball.

“That’s what we need up there and it’s going to be a good battle between the front lads because we’ve got some great options, we’re in quite a lucky position. If one gets injured or one isn’t quite in form, we’ve got someone else who can step in and do the job. We’re lucky to have such a strong squad.”

North End are unbeaten in four away games this term and with another away trip to Huddersfield Town awaiting this weekend, the ‘keeper hopes to continue building momentum with another positive result in West Yorkshire.

“We need to build momentum and last year we did it, we went on a good run and it kept us up there when it wasn’t quite going our way. Getting points on the board early doors is huge, but if you can get on a run of two or three wins on the bounce and stay unbeaten for a good amount of time, it really does help.

“We’ve shown we can do that but we need to do it on a consistent basis and we need to make sure every game is tight and we’re defending from the front, and just not switching off at a crucial time I think is quite important.

“We’re a young squad, it’s going to happen, I think most of the starters are still early 20s, so for this league it’s quite a young squad. We’re only going to get better and it’s shown in the last few years, we just keep improving.”