Ryan Ledson Hoping To ‘Freshen Up’ During The Break

Ryan Ledson has started every league game so far this season and was looking forward to the international weekend, to get himself ready for another hectic run of games.

Ryan Ledson has started every league game so far this season and is looking forward to the international weekend, so get himself ready for another hectic run of games. 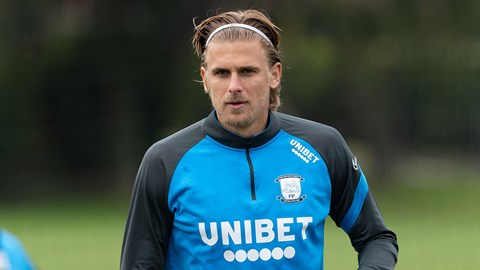 The Lilywhites return to action on Sunday 18th October and then face seven games in 21 days before the next stoppage as players again go off with their countries.

And the PNE No.18 admitted a couple of days off will be welcome after an intensive period: “I am looking forward to a rest, but it is always nice when you get three points to carry on and use that momentum,” he told iFollow PNE.

“it will be nice to get our feet up for a bit, as there are loads of games going on until Christmas; Saturday-Tuesday, Saturday-Wednesday.

“We will look to get everyone freshened up to go again against Cardiff.”

The former Everton man was heavily involved in the win at the Brentford Community Stadium last weekend, providing the assist for Brad Potts’ goal and the corner from which Sean Maguire scored the fourth and he was pleased for each of them, as well as the way the team played.

“I played it to Pottsy and made the run, but if Pottsy has a shooting opportunity, we know the shot he has on him and I am made up for him, he deserves that,” he continued.

“He is a good mate of mine and I see every day how hard he works in training and he deserves the goal.

“There were positive signs. In the first half we played well and yet we found ourselves 2-0 down. It had been a bit of a common theme this season that we had played well and not got the results, but in the second half it just clicked.

“I thought Hughesy was brilliant down the left-side; his link up with Scott for the second goal was brilliant and Seani will have confidence from his goals, so everything feels a bit better now.

“As a team we like to press high and I thought that in the second half, as soon as they got the ball, the press was right on; whether it was Alan Browne, Pottsy, Seani, we were all working so hard to get that ball back and when we got a goal back, we all just believed we could go on to win.”

The break also coincides with the first team’s transfer from Springfields to their new Euxton training base and the midfielder is excited at the prospect of the move: “Everyone is looking forward to it.

“Some of the staff have been there and said how good it is and that will give us an extra little lift as well.

“It is new surroundings and for me it is closer to Liverpool, which I am happy with!

“I am looking forward to getting in there and getting into training, before we face Cardiff.”

The Bluebirds will pose a good test for PNE, having come and won at Deepdale after the resumption of the 2019/20 season back in June and Ryan is wary of the challenge.

“Cardiff are a good side. They are very direct and a very hard-working side. They have a good manager, who has got good models – a bit like our gaffer.

“It is going to be a tough game, but hopefully we can have a little bit more quality on the day.

“You always know it is going to be a scrap against Cardiff. Last year we went down to their place and passed them off the park, but we didn’t win the game.

“We are looking for a bit of revenge; I don’t think it was a 3-1 game [in June], so we are all really looking forward to it.”

Since the new season started, there seems to have been a glut of goals across all the leagues and Ryan, as a player who enjoys watching a lot of football, isn’t surprised, but hopes PNE can keep scoring, as well as keeping things tight at the other end.

“I am finding the games are more open – because there are no fans. Players are now trying stuff and if they give the ball away, no one is on their back and shouting, so they are not a little bit scared to do the next one.

“Players are expressing themselves more – especially going forward. And then at the back, if you switch off, or are maybe not concentrating, it is tough without the fans.

“That is why you need to keep your concentration for the full game, but let’s just hope we score the goals and we don’t concede!

“The last two away games, against Norwich and Brentford – two tough places to go – we have done really well. We know about the Stoke game – that was unfortunate, we all know we would have definitely gone on to win that game [without the red card] – so, we are looking to put it right at Deepdale.

“Hopefully, we can get our first three points there against Cardiff City next Sunday,” he added.