Preston North End manager Alex Neil admitted it was always going to be a test for his team facing Everton at Goodison Park but he has been satisfied with the way the squad has come through the shortened pre-season programme.

Preston North End manager Alex Neil admitted it was always going to be a test for his team facing Everton at Goodison Park but he has been satisfied with the way the squad has come through the shortened pre-season programme. 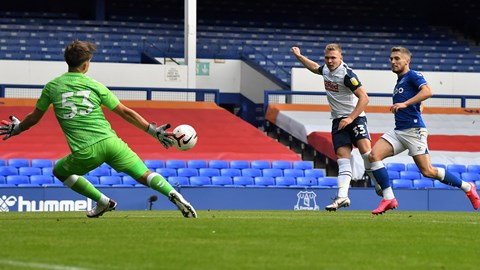 The Lilywhites had come through pre-season unbeaten prior to a 2-0 defeat to Carlo Ancelotti’s side on Merseyside, courtesy of goals in either half from Jonjoe Kenny and Dominic Calvert-Lewin.

Despite that, the Lilywhites gave a decent account of themselves in their third outing against Premier League opposition this week, as the manager explained what he has taken from the pre-season period.

“We haven’t made it easy on ourselves in terms of the games we’ve selected, we’ve wanted to test ourselves, we’ve wanted it to be tough and difficult,”he told iFollow PNE.

“We’ve wanted to stretch the squad in terms of having to do one game then the next game and everybody’s obviously getting tested at that point. We’ve came through it OK so I’m quite happy.”

The manager felt his side grew into the contest after going behind within seven minutes and was encouraged to see his players find a way to be effective.

“We started poorly – I didn’t think we started great and we had a couple of slack passes, concede the goal. And then to be fair, I thought credit where credit’s due, it maybe wasn’t pretty on occasions but I thought we found a way of being effective in the game, went direct off of Jayden, playing off the ball.

“We had two really good chances first half, two breakaways, Ethan Walker had a great opportunity going through. Jayden’s shot as well, the ‘keeper makes the save.” 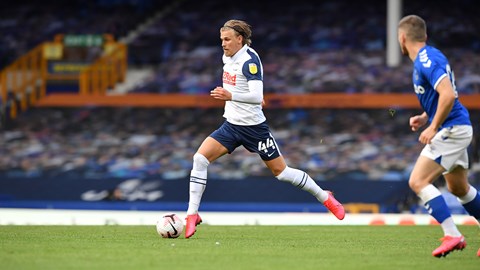 North End had a Tom Bayliss goal chalked off when the linesman’s flag was raised around the hour mark – not long before Everton doubled their lead – and when reviewing those decisions, Alex felt there both were marginal in terms of potential offside decisions.

“I thought the big turning point in the game was we broke away and I think Brad plays Josh Harrop down the side, cuts the ball back across, Tom Bayliss scores, but having looked at it back it’s literally neck and neck.

“Their second goal is the exact same and it stands. That certainly changed the match because if we get that next goal, it galvanises the lads and obviously we’ve got something then to cling on to and we can go and try to force the issue.

“When you concede the second one, the game then naturally just starts to open up at that point because we try to search for the next goal and they obviously get a couple of opportunities off the back of that.”

There was an element of frustration from the boss not to have taken something from the game but he stressed all focus now lies on next weekend’s visit of Swansea City in the Lilywhites’ first game of the Championship season.

“We brought a lot of the younger lads on today as well, so it was a good exercise.

“Swansea is our main focus now, the lads will rest up tomorrow and then we’ll get ourselves going.”