A decent display from Preston North End U18s was not enough to secure three points against a resilient Morecambe side as the hosts ran out 3-1 winners.

PNE got off to the perfect start after Levi Lewis opened the scoring for the visitors after just 11 minutes.

Lewis connected sweetly when his left-footed strike placed the ball into the right corner of the net, topping off an impressive move for the Lilywhites.

The lead was cut short just three minutes later as Morecambe equalised through a deep, in-swinging free-kick that caught everyone unaware at the back post.

With the scoreline locked level and both teams trying to get a foothold in the game, there were plenty of strong challenges from both Teddy Mfuni and Harry Nevin as they worked together to minimise the threat of Morecambe’s No.9.

Preston regained momentum and were playing some nice one-touch football with midfielder Aaron Bennett at the heart of most PNE attacks.

During a good spell of possession for the visiting side, the midfielder showed encouraging signs to get on the ball and make things happen alongside midfield partner Dana Amaral. 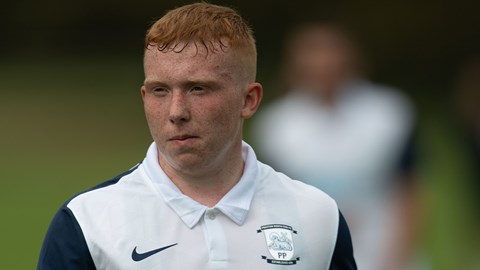 'Plenty Of Positives' Despite Defeat For Bennett

But it was the home side who took the lead on 30 minutes against the run of play as an unfortunate deflected shot trickled past Declyn Duggan and into the North End goal.

The Lilywhites defended well to keep the scoreline at 2-1 after crucial tackles from both Mfuni and Harry Nevin kept the threatening Shrimps at bay.

The away side responded positively, creating two chances before the half-time break with Levi Lewis almost adding his second of the game.

The visitors started the brighter of the two sides and on the 50th minute, Bennett saw a long-range strike narrowly sail over the bar.

Bennett was at the heart of things again for PNE, this time creating a chance for Kyi Nicholson whose attempt was saved by the goalkeeper.

Mikey O’Neil was also unfortunate not to see his effort find the back of the net just a minute later after he was denied by another good save from the Morecambe No.1.

The best chance of the half fell to Bennett again, this time dancing his way through the home side's defence before lobbing the onrushing ‘keeper, only to see his audacious effort come back off the crossbar.

PNE stuck to their game plan of patient, one-touch passing football, but were often met by a sea of red shirts behind the ball when threatening the opposition box.

The closing stages also saw the introduction of last week's hat-trick hero Joe Rodwell-Grant, after he netted three goals in a resounding away win against Blackpool, as well as appearances from Lewis Leigh and Ben Dooley.

Morecambe were becoming increasingly dangerous through counter attacks and almost made it 3-1 on 75 minutes but for a crucial last-ditch challenge by Joe Blanchard.

Ben Dooley had an effort flash just wide with ten minutes remaining on the clock for the Lilywhites, but it would be the home side who would get the next goal and extend their lead with eight minutes to go.

North End looked threatening right to the final whistle but just could not find a way back into the game against a resolute Morecambe defence.

Speaking after the game, Academy manager Nick Harrison insisted that despite the result, there were plenty of positives for his side to take from the game.

“I thought overall, the general performance of the team was good,” he told PNE.Com. “We had some good patterns of play in the game and when we got into the final third we had plenty of chances that we should have scored from.

“We had to be patient and look to break through their lines, but I thought we looked quite threatening when we did break through. The only thing missing was our players being more clinical in front of goal, but overall, the performance was very positive.”

Harrison was also pleased with how influential playmaker Aaron Bennett performed, the midfielder having been unlucky not to get on the scoresheet when his second half effort struck the woodwork.

“I thought Aaron was outstanding. We made the decision to push him higher up the pitch in the second half and he got into some very dangerous areas in the final third and was unlucky not to score after hitting the crossbar.”

The young Lilywhites are next in action with the visit of Fleetwood Town to UCLan Sports Arena next weekend.

Looking ahead to that contest, Nick added: “We will go away now and analyse the game over the week and improve the areas we need to.

“The next game we play, we will be looking for the players to perform well and aim for a more positive result.”