PNE U18 centre back Harry Nevin was pleased to play his part in the side’s opening day win against Carlisle United.

The Irishman made his first competitive start for the youth team in Saturday’s 1-0 victory having joined the club from Cork in the summer.

Nevin played all 90 minutes of the game which was decided by Aaron Bennett’s 79th minute finish.

“We played really well in parts,” the 16-year-old said. “There’s definitely things to improve on but then again you can’t take away from a good performance, a clean sheet and a win.

“I feel like I did my part; I won my headers, I kept the striker quiet and didn’t give him a chance which then helps the team going forward.”

Early on in the second half Nevin had a chance to break the deadlock between the two sides when he found himself free at the back post, but the youngster could only find the gloves of the visiting ‘keeper.

On the chance he said: “I definitely should’ve done better with that chance. I saw the cross a bit late and I tried to get the ball down low but it didn’t go in.” 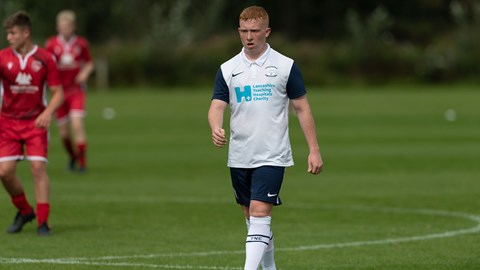 Preston North End U18 vs Carlisle United U18 Match Report

The defender was joined in the centre of the backline by fellow first-year Joe Blanchard, and Nevin feels the two are forming a good partnership.

“Joe’s a very good centre back and I feel quite comfortable beside him because I can trust he’ll do his part of the game and I’ll do mine.

“We both talk to each other and help each other through the game and cover for each other, so we’re working well so far.”

Nevin was one of only a couple of the ten new first-year scholars to join the youth side that hadn’t previously been in the academy set up, and he was full of praise for the way his teammates had welcomed him into the fold.

“The lads are all really nice and they’ve made me feel welcome. The first few weeks was just getting to know people and I’m settling in and getting on with the lads much better now.”

Stay up-to-date with the Preston North End Academy by following @pnefcacademy on Twitter.