Alex Neil took positives in defeat to Brighton & Hove Albion in the Carabao Cup Third Round but said he has already stressed to his players that they must refocus on Championship action ahead of this weekend.

Alex Neil took positives in defeat to Brighton & Hove Albion in the Carabao Cup Third Round but said he has already stressed to his players that they must refocus on Championship action ahead of this weekend. 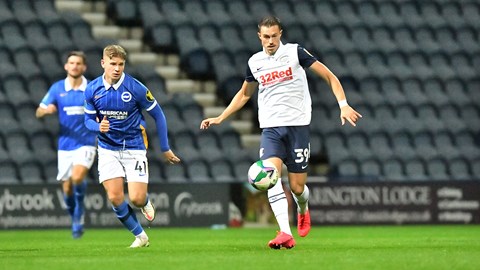 The Lilywhites held the Premier League side for the first half at Deepdale before conceding twice after the break in a 2-0 defeat that sealed their exit from the Carabao Cup for the 2020/21 campaign.

Speaking to iFollow PNE after the game, the manager pinpointed two key chances which fell his side’s way in an opening 45 minutes in which he felt North End performed well.

“The one when Gally plays it into Pottsy’s feet, Pottsy shifts it into Jayden, gets his shot away and the ‘keeper makes a great save down to his left. And then I think it was from the resulting corner, Pat hits the bar with a header from about six yards.

“I thought we should have certainly converted one of those, certainly probably second one, and then they have their best chance right  after that.

“We left ourselves quite exposed in terms of locking them on because they’re good with a ball, they’re a Premier League team and they’ll risk it and make you go the full way to press them.

“I thought the second half we started quite bright, I thought we were actually on top of the game for ten minutes. And then one of our free-kicks, put the ball in, ‘keeper collected it and then they broke up the other side of the pitch, ball gets whipped in, we miss the tackle and then to be fair to the lad, it’s some finish. 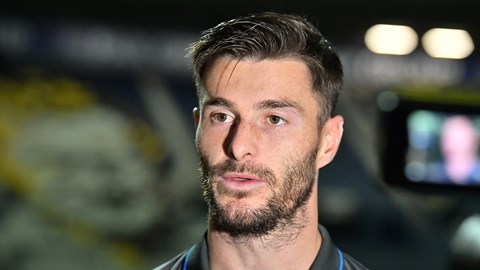 “I’ve watched the goal back and I didn’t realise how good a finish it was. I think after that we found it a wee bit difficult because to try to get back into the game once a quality team like that gets the lead, it then proves to be difficult.

“I think the disappointing thing is we didn’t really look threatening after that in terms of getting any opportunities to go and get the next goal.”

The manager admitted that the game became much tougher after the visitors opened the scoring and even further once their lead had been doubled.

“I think if they score first, it becomes doubly difficult because they’re well versed in opening the pitch up then and then you try to hunt it and then they pick you off and hurt you.

“I was a bit disappointed in our reaction, I didn’t think we really rallied and went after the next goal as much as I thought we would have.

“At that point [after the second] the game is over really. We put a couple of lads on to give them some minutes in the legs as well and hopefully try and give us something to stretch in behind; I didn’t think we stretched the game enough, that was due to personnel as much as anything else.

“First half I was really quite pleased, I was more disappointed second half in terms of when we did concede, I didn’t think we really carried a threat after that.”

The main positive for the gaffer was the threat his side caused in the first half but his attentions have already fully switched to the weekend’s visit of Stoke City to Deepdale as Championship action resumes.

“I certainly think first half we caused them as many problems with the ball as they caused us. The game went in spells where, like it does at Premier League level, teams have the ball, try and damage you, you get it back and you’ve got to try to do the same.

“We need to focus for Saturday now, I’ve said that to the lads, this game’s now over and done with. We can take pleasing bits away from the first half and then obviously we want to try and learn from the bits in the second half that we didn’t do particularly well. Let’s try and hopefully get better and see where we go Saturday.”