Alex Neil said Tom Barkhuizen’s controversial dismissal changed the game against Stoke City and the manager was confident that his side would have gone on to take at least a point had they continued with eleven men on the pitch.

Alex Neil said Tom Barkhuizen’s controversial dismissal changed the game against Stoke City and the manager was confident that his side would have gone on to take at least a point had they continued with eleven men on the pitch. 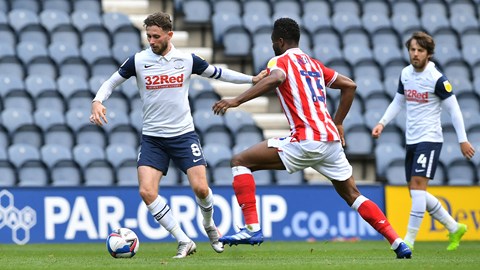 The Lilywhites had started the game superbly, set-up in a 3-5-2 system with Jayden Stockley and Sean Maguire in attack, but their momentum was disrupted by Barkhuizen’s 22nd-minute red card, which was followed by Lee Gregory’s only goal of the game.

Speaking to iFollow PNE after the game, the manager said he had been ‘delighted’ with how his players had performed in those opening stages of the contest.

“The sending off changes the game, I don’t think anybody can say otherwise,” said Alex. “We changed our shape today, I thought we went really aggressive, two wingers playing wing back, two up top, and I think certainly on the evidence of what we saw at the start of the match until the sending off, I thought we started great.

“I thought we looked as if the team were going to go onto win the game, put some great balls into the box, good width and I thought the front two were linking well. Everything was going exactly as we had hoped. At that point we were delighted.”

The manager felt there was no indication of malice from Barkhuizen in the challenge that led to his red card.

“It was right next to their dugout, they’re all up in arms, the lad’s rolling about and to be honest I wasn’t quite sure what had happened. Once I’ve seen it back, I think Tom’s extremely unfortunate.

“He’s running towards the ball to try and get there, he tries to slow down realising he’s probably not going to make it and then starts to lose his footing and sort of slides into the tackle. I certainly don’t think there was any signal of intent there.

“It will be really interesting because I certainly imagine we will be appealing that and once they look at it back, certainly anybody who’s played the game, they will understand that there’s no intent whatsoever from Tom there to hurt the player or even to go into the tackle, I don’t think he’s actually trying to tackle at all, he just sort of slides into it.

“We’re extremely hopeful that that should be overturned.”

The manager was still relatively satisfied by how his side performed and even when a man down in the second half felt there were chances to score for the Lilywhites.

“I thought we played really well. Even with ten men, I thought there was a couple of occasions as the first half wore on we didn’t defend well enough, particularly down the sides,” he added.

“The goal was poor, we narrowed off and we should have bumped ourselves out of it and stopped them getting down the side of us for the goal. Second half you could see they’ve come out and tried to find their wing backs and it causes us a bit of an issue. We then changed it after ten minutes and I thought we got better again.

“I thought we started to throw more caution to the wind and naturally you’re going to leave yourselves a little bit more exposed, but I thought there was a goal in it for us.

“I didn’t think that with eleven men Stoke were great or dominant by any means and I certainly felt our lads gave as good as they’ve got, they gave everything for us today, there’s not many complaints I can have.”

There was also disappointment from the gaffer about the good work his side had done in preparing for their 3-5-2 set-up had counted for little following the red card.

“I think the biggest disappointment we’ve got is we’d done a lot of work on changing our set-up today and I thought it looked extremely good and the referee’s decision has changed the dynamic of the game and made it extremely difficult for us.

“I do believe that if that didn’t happen, I would have been really confident that we would have picked up certainly a point, if not all three.”