Alex Neil was pleased to see his players’ determination to get the right result shine through as the Lilywhites progressed in the Carabao Cup with a 2-1 turnaround victory against Derby County at Pride Park.

Alex Neil was pleased to see his players’ determination to get the right result shine through as the Lilywhites progressed in the Carabao Cup with a 2-1 turnaround victory against Derby County at Pride Park.

Despite a dominant first half display, North End went in level at the break before conceding to Jason Knight’s opener – and it took a 79th minute Tom Barkhuizen equaliser and injury time Daniel Johnson penalty for the visitors’ fortunes to turn around. 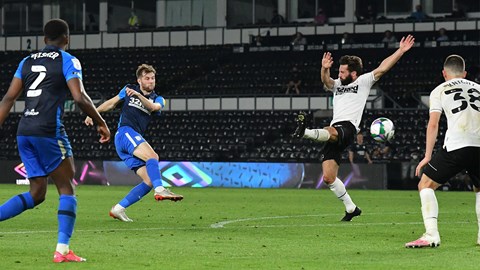 Speaking to iFollow PNE post-match, Alex said that his only disappointments on the night were ones that proved key in PNE going behind early on – conceding that opener in a rare home attack, and failing to take their own chances at the other end.

“The only disappointing thing is first half we had two really good chances, at least two,” he said. “Our pressure was excellent, I thought we bided our time and we went about it in a bit of a different manner tonight in terms of how we applied pressure on the ball.

“I just felt in certain areas of the pitch, we needed to make sure we were nice and solid, in behind the midfield and certainly their front players are dangerous and we wanted to make sure that we snuffed that danger out.

“The disappointment is they have one attack and score, one transition, we probably could have stopped it further up the pitch, and then it ends up in the net.

“I thought from that point our application, our mentality and strength of character shone through in terms of how we approached it after that because it’s easy then to feel sorry for yourself and give up a little bit. I thought we rallied, we went in search for it.

“All in all I thought the lads thoroughly deserved the win and it’s nice to get our first win under our belt.”

The manager was also pleased to see substitutes Barkhuizen, Johnson and Scott Sinclair all playing a key role off the bench.

“We pressed the ball in a variety of different ways, we tried that one tonight differently because of the personnel we had – I thought it worked extremely well. I’ve got intelligent footballers in my team so it’s not difficult to vary things and change it up.

“Sometimes a fresh message makes the world of difference because you’re not doing the same thing all the time. When they went down to ten men we went two up top, stretched the game, brought two out and out wingers on and one scored his goal and Scotty was at the forefront of creating another goal as well.

“He’s been a goal threat, that’s the one thing Tom always carries. He’s a real threat, he’s got the pace to get in behind them, stretch them and worry them and drop their defenders off.”

Most pleasing of all perhaps for the boss was the team’s mentality to keep pushing and eventually gain their rewards in the form of two late strikes to turn the tie on its head.

“There’s been a little bit of negativity swelling about it and it’s really annoyed me because I don’t think there’s any need for that and I think what we’ve got to do is we’ve got to get focused.

“We showed real determination to get a result tonight and that’s an important thing. This team that we’ve had for a number of years, this has been the strength of this club for a few years now and we’ve got to continue that.

“We can’t get knocked off track, tonight was important for a lot of reasons and we’ve got a big game on Saturday. The cup will take care of itself if and when it comes around, but obviously Norwich on Saturday is a big one for us and a few of the lads did themselves no harm at all tonight.

“For the weekend, it’s about getting the balance right and making sure when we go into the game, we’ve got good balance in the team, we carry a threat and defensively we’re solid.

“It’s quite simple football – without the ball you need to be able to get it back in a good manner and apply pressure and with the ball you need to be threatening and I thought we did both of that tonight. We want to try to take that into Saturday and we’ll have a look, see who’s available and fit and ready to go and try to pick the best team to win the game.”