Preston North End forward Jayden Stockley is hoping he makes the starting XI in the second round of the Carabao Cup, so he can put a marker down.

Preston North End forward Jayden Stockley is hoping he makes the starting XI in the second round of the Carabao Cup, so he can put a marker down. 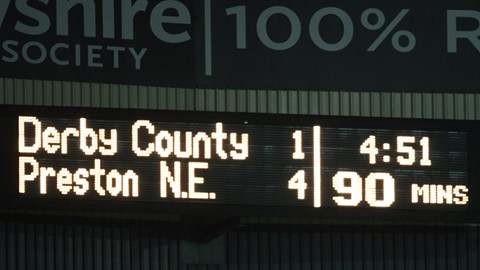 The Lilywhites’ No.20 believes there are places up for grabs in the team going forward and hopes to put his best foot forward against the Rams if he is given a starting shirt.

Speaking to iFollow PNE, the former Exeter City striker feels the team will be looking to use the frustrations of Saturday to create some momentum.

“It is a chance to build some momentum going into the Saturday game,” said Jayden. “Everybody is equally frustrated around the training ground about the result at the weekend. I think it was a very typical first game of the season, quite cagey and I thought a draw would have been the right result.

“It was like both teams are structured right, defensively sound and just waiting for that spark at the top end of the pitch and which team could provide it. Unfortunately, it wasn’t us on the day and I think the more games that come it will click together.

“There could be a chance for other lads to get a game on Tuesday and hopefully we can create some openings.

“Personally, if selected, it is going to be a big chance for me. Everyone knows there is a big competition for places. There would have been a lot of lads that were disappointed they didn’t play the first game of the season and I think that is only right in a competitive environment like this. If I am selected, it is a chance to go and do well and get into some good form.”

But the frontman is well aware that Derby will see it the same way and will be looking to bounce back from their 2-0 opening day home defeat to Reading at the weekend.

“They will see it the same way,” he continued. “They didn’t get the result they wanted at the weekend either; it is almost identical situations with both teams. They will want to win it as much as we will and it should be a very good game.

“Since I have been here all the games with Derby have been very tight, whether it is a set piece or similar that has decided it. They played a lot of football when they came to Deepdale [in July] and it will be interesting to see what they do with their team.

“I think both teams will be relatively strong, because of the results at the weekend, looking to build some momentum into the next round of league fixtures at the weekend.

“These are the games where you look to impress and stake your claim for a start in the league matches. They are important for the squad and the competitive nature of the group, which is why [on Sunday] the lads who didn’t play came in to train, whilst the other lads did a debrief.”

The competition last year brought then Premier League Champions Manchester City to Deepdale and with Brighton & Hove Albion or Portsmouth next up for the victors, Jayden is hoping that PNE can be the side that surprises people in this season’s competition.

“I’m desperate to win it, because you never know who you might get in future rounds. It can be a great chance to play at some grounds or you could get a local derby. There is always one team who seems to surprise people and at the start of the season you always think that could be you, so everyone who is picked should be desperate to win the game.

“The Manchester City game was brilliant to watch and test ourselves against them. If we can get the better of Derby on Tuesday, hopefully we can keep going and get an exciting tie later on in the competition,” he added.

The full game will be live on iFollow PNE, with match passes now on sale for just £10 with full commentary provided by Guy Clarke and a special guest co-commentator, on air from 6.15pm for the 6.30pm kick-off - click here now to sign up for a match pass.