Ryan Ledson felt Preston North End’s ‘brilliant’ display against Norwich City was more deserving of all three points rather than the 2-2 draw they claimed at Carrow Road.

Ryan Ledson felt Preston North End’s ‘brilliant’ display against Norwich City was more deserving of all three points rather than the 2-2 draw they claimed at Carrow Road. 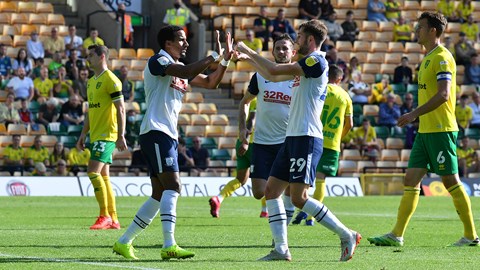 North End twice led thanks to a Scott Sinclair penalty and Darnell Fisher’s sweetly struck first goal from the club, seeing them in front at the break after Teemu Pukki’s initial equaliser, but the hosts again pulled level through Przemysław Placheta late on.

North End’s No.18 was pleased to play his part in a positive performance against the recently relegated Premier League side and is confident the Lilywhites can cause problems for any side with the approach they deployed against the Canaries.

“I thought our set-up was brilliant, the way we pressed them, we obviously knew they like to play out from the back,” Ledson told iFollow PNE. “I thought the lads were absolutely brilliant today and we deserved all three points.

“I thought across the board we were brilliant. Back four obviously quality, I thought Sean and Scotty work so hard, even Barks as well. We play at 100 miles an hour and we like to match people up because we feel we can get the better of them man for man all over the pitch. I think if we can do that to any team in this league we’ve got a good chance.

“We knew we had to come out again second half and press them really high. We knew it was going to be a real tough game. Lads are going down with cramp at the end which shows just how hard we’re working. I thought we gave them a game right until the end, it’s disappointing to concede late on.

“You’re coming to these places and obviously we wanted to take all three, but in the end, if you take a point, it gets us up and going and onto midweek now in the cup and Stoke on Saturday.” 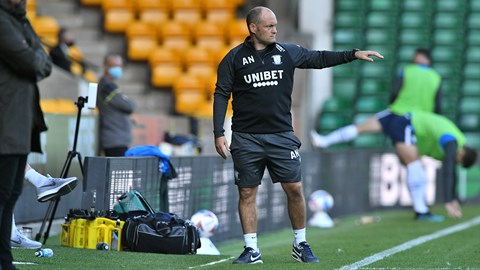 Ledson’s defence-splitting pass for Scott Sinclair was a key part in North End’s second as the No.31 saw his shot cleared close to the line, only for Darnell Fisher to fire home the rebound for his first goal for the club.

That came after Sinclair had slotted home from 12 yards – in the absence of usual penalty takers Daniel Johnson and Paul Gallagher – to first give the visitors the lead early on.

“Fair play to the referee, obviously it’s a big decision and he’s made the right one, which is good. Scotty Sinclair gets the ball, says, ‘I’m taking it,’ and you can’t really say much to him. He sticks it in the back of the net.

“The goal [Norwich’s first equaliser] has killed us a little bit. But we bounced back well, showed good character to get back on the ball and play and I’m made up for Darnell. He’s a great lad around the changing room and I’m made up that he got his first goal.

“If I’m in the team next to Pearo, I feel I’ve got to be the one with the licence to get forward and play a risky pass and try to carve them open and today I’ve done it. It’s a great run from Scott and I’ve found him. If I can find the lads in that area then I can let them go and do their stuff and that’s what they did today.”

This afternoon’s game also saw the return of crowds for the first time March, with 1,000 spectators inside Carrow Road, and Ledson hopes that the number of fans allowed inside stadiums will only to continue to grow as the season wears on.