Aaron Bennett was pleased with how Preston North End U18s performed against Morecambe U18 despite it proving to be a tough away day for the Lilywhites. 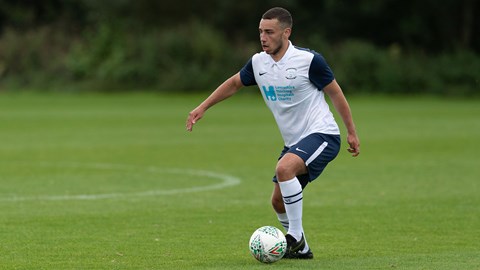 Bennett had started brightly for PNE as they took an early lead through Levi Lewis after he converted on 11 minutes, before Morecambe completed a turnaround that saw them take all three points.

Speaking after the full-time whistle, Bennett said: “I thought we controlled the game for most parts but just couldn’t punish them, we could have defended slightly better for the goals, but overall, I am pleased with how the team performed.”

North End had enjoyed large spells of possession throughout the game and had to be patient against a resilient Morecambe side.

Bennett added: “We worked on being patient and switching the play as we knew we would have most of the ball, we kept playing the way we wanted even though we knew it would take a lot to break them down.

“I didn’t impact the game as much as I wanted in the first half as I was playing in a deeper role, when the second half started I was moved higher up the pitch, this is when I felt I could have more of an impact.”

The midfielder was key to much of PNE’s attacking play and looked the most dangerous player going forward for the visitors, firstly setting up a chance for Kyi Nicholson before having an attempt of his own that unfortunately sailed over the crossbar.

Bennett's best chance came on 60 minutes when his effort came back off the woodwork.

“I’ve just seen the space and ran in to it, beat a few defenders and seen the 'keeper coming, so thought I would lob him, it was unlucky not to go in.

“We still have plenty of positives to take from today’s game, we are a team that can create opportunities to score goals but also defend well too. We have to look forward to the next game now.”