Joe Rodwell-Grant said he was ‘over the moon’ after scoring a hat-trick as PNE U18s stormed to a 6-0 win over local rivals Blackpool. 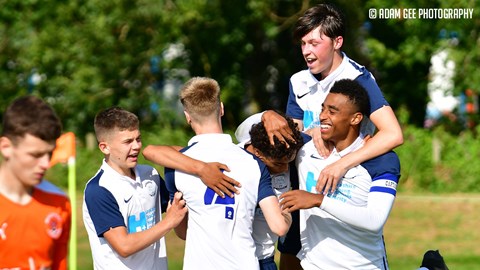 The striker dispatched two first half penalties and coolly converted a Ben Dooley cutback shortly after the break to help his side to a second successive North West Youth Alliance league victory.

Goals from Noah Mawene and Dooley and an own goal rounded off the impressive performance to give North End bragging rights in the M55 derby.

“Ben’s given me a great assist for the third goal and after I’ve scored it, I was over the moon, I was buzzing with it.

“It’s always a positive when you keep a clean sheet, that’s the first basis of winning a game but to score six goals on top of that is special, and it’s even better when it’s against your rivals.”

The 17-year-old was faced with the rare challenge of taking two penalties in one game when Lewis Leigh was brought down in the box on the stroke of half-time, having already won and converted a spot-kick 15 minutes into the game.

“As I’ve gone to get the ball for the second penalty there was loads of thoughts going through my head on whether to change where I put it, but as soon as I put the ball on the spot I knew I was going to score.

“It’s just one of those where I’ve got to keep a cool head and slot it away which thankfully I did.”

The second year forward has been given the captain’s armband for the first two games of the season and it is a role he’s revelling in so far.

“It gives me even more of an incentive to lead the team and lead by example, especially to the younger lads because I was at that position last year and I wanted to be the captain coming into this year, which I am now and it’s amazing.

“I’m just trying to kick on now and keep scoring goals and hopefully things will fall into place.”

Stay up-to-date with all the latest events from the Preston North End Academy by following @pnefcacademy on Twitter.