Goals from Vaughn Green and Noah Mawene either side of half-time were not enough to secure the three points for the Lilywhites, who suffered an unfortunate defeat.

Academy manager Nick Harrison made four changes from the side that made the midweek trip to Carlisle United, as Kyi Nicholson, Joe Blanchard, Harry Huddart and Lewis Leigh came into the side.

North End had the first chance of the game in the first few minutes of the match – Noah Mawene flashing a header just wide.

It was the visitors who went the closest to scoring moments later, only to be denied by the ever-reliable Oliver Lombard, smartly saving a one-on-one from Bolton’s Jay Fitzmartin.

Leigh began to look threatening for PNE on 20 minutes after his forward-thinking play won a corner for Harrison’s men. The resulting corner fell to Green, who unleashed a venomous strike past the ‘keeper from close range to open the scoring.

The Trotters were forced into the first change of the game on the half hour mark as Max Wilcox was replaced by Burgess Joel due to injury.

Two quickfire goals on 32 and 35 minutes from the visitors stunned the Lilywhites, as Le Fondre converted two headers in quick succession, completing a first half hattrick and Wanderers' turnaround.

As the first half entered the closing stages, the away side were denied a fourth following some great defending from Teddy Mfuni and Huddart at the back – keeping North End in the game at the break.

The Lilywhites began the second half in much a more lively fashion, looking to go up a gear as they increased the intensity of their pressing, passing and all-round style of play in search of getting back into the game.

And on 58 minutes, Aaron Bennett was unlucky not to score after his long-range effort was met by a finger tip save over the bar by the Bolton No.1.

PNE did find a way back into the game just on the hour mark, after captain for the day Mawene headed home from close range to give the hosts a much-needed lifeline, Bennett claiming the assist. 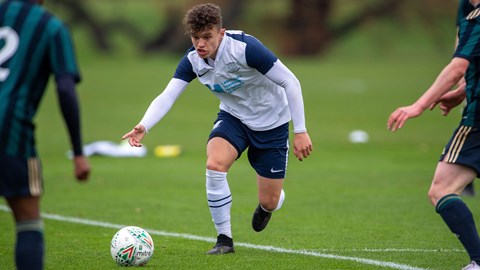 The Trotters responded to the goal by making a double change – Finley Lockett and Jack Thompson were replaced by Mitchell Henry and Wesley Frimpong, while Mikey O’Neil and Harry Nevin replaced Green and Mfuni soon afterwards.

The game then became disrupted by fouls and free-kicks, which broke up any momentum North End were trying to build and frustration began to show.

Lombard was called into action again with ten minutes left to play as he produced another fine save – this time with an outstretched right hand denying a certain goal.

Bolton made the final change of the game when Arran Pettifer was substituted for Rio McCovey as PNE continued to search for an equaliser.

Despite late pressure from the valiant Lilywhites, it was not enough as The Trotters added a fourth deep into injury time through Jay Fitzmartin, who secured all three points for the visitors.

Speaking after the game, Harrison thought his side started well, but said they ‘need to do it in both boxes’ if they are to win their remaining games of the season.

Nick told PNE.Com: “I thought it was a really good start from us in the first half, we started on the front foot and deserved the opening goal of the game, although it did disappoint me that we conceded the equalising goal and let them back in the game, but full credit to Bolton; they are a good side and took their chances.”

Harrison had given an encouraging team talk at half-time to the players, telling them to play with pride and give it their all as they entered the second half.

“The challenge to the players at half-time was to get back into the game, to do that they needed to play with a certain level of pride and character.

“At the end of the game, I said to the players that I felt they had done that. We dominated the second half, we created chances, we were just unfortunate to get done with a sucker punch right at the end.”

The Academy manager explained that his side need to improve in both boxes.

“Moving forward we need to do it in both boxes, we have got the players to score goals and defend but you can’t concede the goals we conceded today at this level, that’s the challenge to the players, keep creating chances and scoring goals but make sure we are defending our own goal at the same time.”