Preston North End face Stoke City for the 100th time in league action when they travel to the bet365 Stadium on Saturday lunchtime.

The Lilywhites lead the head-to-head with 44 wins to the Potters’ 34, going back to our first success there in the inaugural Football League season when we added a 3-0 win in Stoke to our early season 7-0 scoreline.

That scoreline, 133 years ago, is still our best ever win in Stoke. Since they moved to their new home in the last 90s, we have won there three times, including our last two visits, with the very first, our featured game – where Saturday’s iFollow co-commentator, Michael Jackson, proved the match-winning hero.

Our first ever win there came on our first ever visit, on Boxing Day 1998, with a wild and windy afternoon at the ten Britannia Stadium.

There were gale force winds and driving rain in Staffordshire for the festive fixture, but David Moyes’ side extended their excellent away form to six wins, four draws and just a solitary defeat in their 11 matches on the road at the mid-way point in the season, with the team sat one place behind their Christmas hosts in the table, fourth in what is now League One.

A crowd of over 23,000 packed in, despite the wintery conditions, with winds gusting up to 80mph, but it was the visitors who coped better in the wind than Brian Little’s hosts and they began like a hurricane themselves, taking the lead – with what proved to be the winner – after only seven 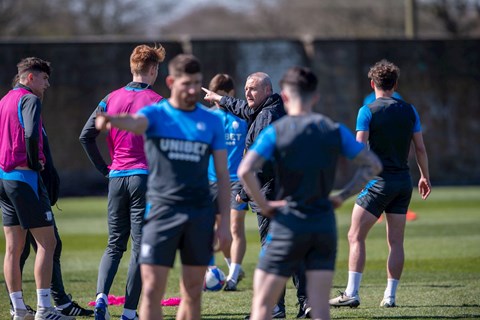 The early pressure continued and Eyres stung the gloves of Carl Muggleton in the City goal just two minutes later, with Lee Cartwright recycling the ball back into the box for Jon Macken to shoot, only for Phil Robinson to clear the effort off the line.

And it could have been 2-0 from the resulting corner; Eyres again using the wind to curl a dangerous ball into the mixer, with Jackson once again heading home, however, this time Teeside match office Graham Frankland adjudged that Muggleton had been fouled in the build-up by Colin Murdock.

It took the home side almost half an hour to carve out an opportunity and when they did Kevin Keen stabbed his effort wide of the right-hand post, not testing David Lucas.

In the second half the Lilywhites had to cope with more of the pressure and put in an excellent rearguard action, but still were a threat themselves – Jackson’s bullet header from Cartwright’s cross just before the hour mark, flying just inches over the bar.

But at the other end most of the action was taking place in the second period; Murdock making a superb block to prevent David Oldfield getting through on goal and Stoke having a goal of their own disallowed after a corner had been bundled into the net – Frankland seeing a push on Lucas.

And it was PNE’s young England stopper who guaranteed the points would be coming back up the M6 late on, firstly denying a Graham Kavanagh blast from distance and then saving superbly from David Oldfield. But it was right at the death that his best stop came, when Peter Thorne looked to have grabbed the equaliser.

The striker put in an acrobatic overhead shot that was heading into the far corner until the PNE No.1 flung himself across the goal to palm the ball away and despite an additional five minutes being added on.

Speaking after the game manager Moyes turned his immediate attentions to the home game against Wrexham just two days later. He said: “We now need to turn our superiority at home into more wins like this. We’ve got to make sure the back door is shut at home.”

You can watch the game live and listen to Jacko no doubt recall his match-winner on iFollow PNE this Saturday, when he joins Jonathan Breeze for full-match coverage from approximately 12 noon live and exclusively for UK and Irish residents. Click here now to purchase a match pass for £10.