Cunningham: “A Solid Point Away From Home”

Greg Cunningham felt his side’s goalless draw on the road at Stoke City represented a solid point away from home, but admitted they might have come with away more on another day.

Greg Cunningham felt his side’s goalless draw on the road at Stoke City represented a solid point away from home, but admitted they might have come with away more on another day.

North End were defensively solid throughout at the bet365 Stadium and grew into the contest for in an attacking sense after the break, going closest when Andrew Hughes’ low free-kick cannoned back off the post. 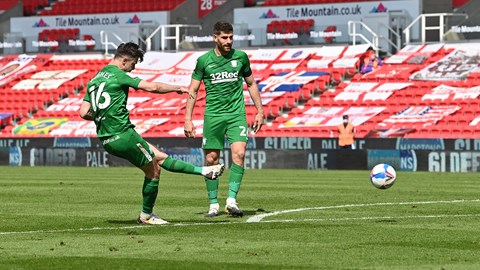 Coming off the back of the disappointing loss to Brentford last time out, the defender felt it was particularly important to register a point on the board.

“I wouldn’t say it was a tale of two halves, but I felt that Stoke caused us a few problems first half, which obviously we dealt with,” the Irishman told iFollow PNE.

“In the second half, I thought we were more on the front foot, we posed more of an attacking threat. Bar [Steven] Fletcher’s header, which was offside, I didn’t feel they posed too much of a threat.

“We were solid in defence and the sending off, I suppose it’s a point gained really for Stoke in that respect because when Browney is running through on goal, there’s only one outcome. The defender probably made the right decision to take him down because the way the second half was going, I couldn’t really see Stoke scoring.

“In saying that, it’s a solid point away from home against a tough opposition and obviously coming off the back of our last loss, it’s good to make sure that we got a positive result.”

North End’s No.37 also noted that it was important to remain defensively solid for the entirety of the contest.

“They were posing some threats, so it was important for the back give to make sure we were solid and the boys in the middle and up top to close the ball down as much as possible.

“The pitch became very big first half, but I thought second half, we condensed it well, we were more on the front foot, picked up our seconds, and intercepted a lot of balls, which put us into that attacking transition. We were unlucky probably not to get a goal or two today.

The defender was pleased to mark his return from injury by getting 90 minutes in the tank.

“I’ve been out for a few weeks so it’s great to get back on the pitch again, get 90 in the legs and look to Tuesday. I feel good in myself. It’s disappointing to pick up that injury, but I’m back, I’m strong and I’m looking forward to a final push for the last four games.”

Greg is now intent on finishing the season strongly and carrying through some positive energy to start next season.

“You’d be hoping that the games mean so much because you’re battling at the other end of the table. We’ve got a small bit of breathing space but we’re not being complacent in any manner. We need to finish the season as strongly as possible because that carries momentum through to next year.

“It’s been a frustrating season for everyone associated with the club so far, but we can try to put a positive spin on it and make sure that we play with pride and passion, get the rub of the green and get results and finish very strongly.

“It’s important to make sure that you’re defensively solid and then let the match-winners go and do that, there’s a fine balance I suppose between scoring loads of goals and setting up shop and that’s the challenges with managers, to set the team up in the right manner. Two clean sheets away from home is positive.

“A win, two draws and one loss since Frankie took charge has been a pleasing start for him. We just need to make sure tomorrow we recover and get ready for Derby on Tuesday and put them to bed.”