Frankie McAvoy praised his players’ and backroom team’s efforts in helping Preston North End to secure Championship status for next season thanks to the 1-0 win over Coventry City at St Andrew’s.

Frankie McAvoy praised his players’ and backroom team’s efforts in helping Preston North End to secure Championship status for next season thanks to the 1-0 win over Coventry City at St Andrew’s.

Alan Browne scored from the spot midway through the second half to make it back-to-back wins for the Lilywhites, with the three points ensuring they cannot be caught by any of the bottom three sides looking to escape relegation. 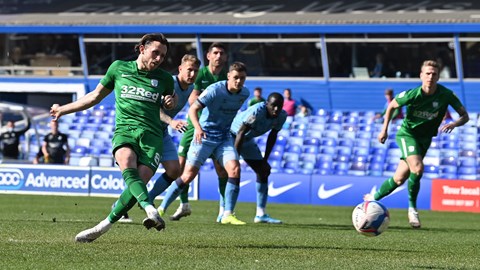 The interim head coach has now overseen three clean sheets in as many away games since taking charge at the start of April, but pointed to the work of the squad and backroom team to achieve that feat.

“It’s a team effort,” Frankie stressed to iFollow PNE. “The guys that I’ve got in the backroom team here with Tommo [Steve Thompson], Gally [Paul Gallagher], Mike [Pollitt], myself and even the analyst boys that work, the physios, the sports scientists – it’s a team effort. We work together, we try to get the players prepared as best as we can.

“I said to them [the players], ‘You need to believe in yourselves, you’re good players, all we’ve got to try to do is find the best way for us to try to pick up as many points as we can.’

“I don’t think anybody could disagree with me that the 3-5-2 seems to be the best way for us at the moment. We look a wee bit more solid at the back.

“This was a tough game, they’ve won four of their last five games. They beat Barnsley here 2-0, they beat Rotherham, they beat Stoke City just the other night. They’ve done exactly what we had to do, they’ve found a way as well, went 3-5-2, and they’ve picked up some valuable wins, and sometimes you’ve got to do that.

“We’d all love to try to play football as best as we can, but what you’ve got to do is when you’re feel as though you’re in a dogfight at the bottom, you’ve got to try to find a way to win games. Credit to the players, they’ve done that.”

However, Frankie admitted that things hadn’t been gone enough prior to him taking interim charge and said that has been key in his discussions with the players.

“I’m just delighted for the players because we had not done well enough. I’m honest, I was part of that, obviously culminating in Alex moving on. We really needed to take a good, hard look at ourselves and try to find a way, first and foremost, being a Championship team, and then trying to find a way of winning as many points as we could and finishing as high up the league as we could.

“Credit to them, in the six games, we’ve managed to do that. We had the blip at Brentford, I was a wee bit gung-ho, but since then, we’ve managed to fix that, I think that’s three clean sheets in a row for them. The players are the guys that do it on the pitch and I’m absolutely delighted for them.” 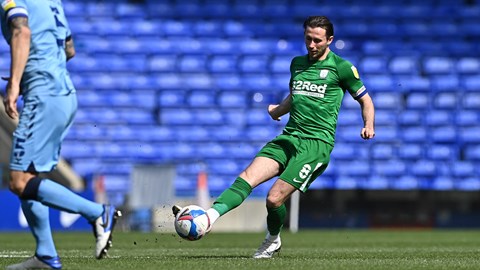 North End might have had a penalty minutes before skipper Browne put his effort away, when like the penalty awarded Ched Evans was felled by ‘keeper Ben Wilson.

But Frankie said he had encouraged his team to keep fighting if things did not go in their favour.

“I’ve not seen it back,” he continued, speaking of the possible penalty. “I was giving the fourth official a wee bit as well because I thought from where I was it looked like a penalty. They only get one bite at the cherry and sometimes they [the referees] get it wrong.

“The good thing for us was, I said to the players, ‘Don’t worry if something goes against you, just try to keep believing that opportunities and chances will come your way, and when they do, we’re ready and we can try to maybe take them.’

“Thankfully, it fell for a penalty where Ched was pulled down again and Alan obviously sticks it away, so I’m delighted for them.”

The interim head coach is now continuing with the same mantra of looking no further than the next game, which will see promotion-chasing Barnsley visit Deepdale next weekend.

“They will be fighting to try to stay in the Play-Off positions. Coventry is finished now, our task will be to just focus on Barnsley and we’ll set ourselves up the best way that we think we can go and try to win the game and hopefully do that and try to finish as high up the league as we can.”