Frankie McAvoy praised his team’s disciplined approach which helped them to a commanding 3-0 victory over Derby County at Deepdale.

Frankie McAvoy praised his team’s disciplined approach which helped them to a commanding 3-0 victory over Derby County at Deepdale. 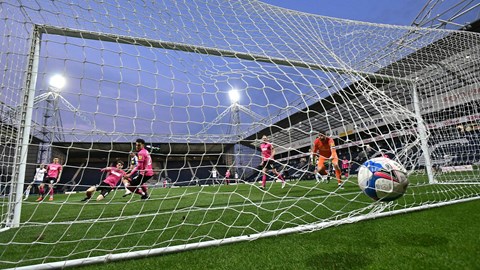 Ben Whiteman’s first half header put the home side in control before goals late on from Ched Evans and Ryan Ledson sealed the three points and the Lilywhites’ Championship status for next season.

And the interim head coach told iFollow PNE that he was delighted for everyone with an association with the club after the win.

“I’m delighted for everybody that’s connected with Preston North End,” he said.

“I know we got a bit of a drubbing off a lot of people once Brentofrd beat us 5-0, but I was the person that tried to win every game, and you learn, and the players learn as well. “Tonight, the biggest thing we needed to do was to be disciplined. We knew it was a big game, it was a big game for Derby, everybody’s saying it was their cup final, but it was a big game for us as well and people forget that we come into this in a really, really poor run with eight games to go.

“In five games, the boys have churned out two wins, two draws and a loss. Absolutely delighted for them, I’m delighted for Mr Hemmings and Peter Ridsdale as well. They’ve given me an opportunity and a chance to try to galvanise them and do the best I could with them and I thought tonight it came to fruition.

“I’m delighted for everybody connected with the club, the supporters, enjoy it, that’s the most important thing.

“Tonight, to a man, the discipline they kept was great. Derby changed their shape, they went 2-4-4 to try to pin you back and I just said to them, ‘look, you’ve just got to be disciplined, but you’ll get opportunities and chances, you just need to be disciplined in terms of how we approach. Make it go wide, defend inside and make it difficult for them.’ 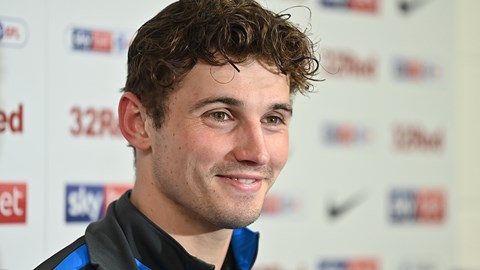 “We weathered the storm a wee bit at the beginning of the second half to be honest and I knew that. When you’re down there and you’re fighting for your life, you throw caution to the wind. I thought we seen that wee bit out and then to a man I thought we were great, I’m delighted for them all.”

With the midfield three of Ryan Ledson, Ben Whiteman and Alan Browne all having an involvement in least one of the goals, Frankie had plenty of his praise for the men in the middle.

“Fantastic ball from Alan, those runs, you just forget the quality that’s required to do that, it’s a wee clip up and Ben arriving, his timing of the run was fantastic,” he said of Whiteman’s opener. “They’re things that we’ve worked on.

“I looked for Ben to try to get more up towards the box because he’s got a great strirke on him, he’s dangerous. Ryan gives us everything, he’s an absolute warrior, and Alan is a top Championship player. The midfield three, I’m very, very comfortable with.

“It’s difficult when you’re having to leave guys out. It’s one of the hardest things you’ve got to do as a coach. You’ve got to try to pick the best team that you think is going to win the game, we’ve tried to do that in each game that we’ve played and tonight I’m delighted again for everybody.”

Frankie was also pleased to see Ched Evans rewarded for his hard work by getting back on the scoresheet in the second half.

“I said to Ched at half-time, ‘Listen you’re out on the wing here trying to cross the ball in, I want you to just play it back, get yourself in the box, get between the frame of the goal, that’s where the opportunities, chances will hopefully fall to you, and when they do, you just need to be clinical and take them.

“Fortunately enough tonight, it happened for him. His second half performance was great. He was a handful all night. Tommy B working off him was a good foil for us.

“We’ve made ourselves solid at the back, that’s three clean sheets out of five as well, you’ve got to give them great credit, I’m so proud of them, they deserve everything they get. The plaudits come their way, enjoy it. But back to business on Thursday and preparing for Coventry City.”