McAvoy: “We Deserved To Win The Game”

Interim head coach Frankie McAvoy described his team’s performance as ‘excellent’ and felt they deserved their 1-0 victory over Swansea City at the Liberty Stadium.

Interim head coach Frankie McAvoy described his team’s performance as ‘excellent’ and felt they deserved their 1-0 victory over Swansea City at the Liberty Stadium. 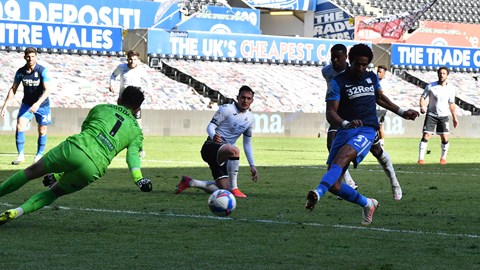 Scott Sinclair came off the bench with a quarter of an hour remaining and his impact was there for all to see; playing a major part in the winning goal, as his last-ditch shot was saved before rebounding in off Swans skipper Matt Grimes in the 90th-minute.

Speaking to iFollow PNE after the game, Frankie felt the late goal was greatly merited, after an impressive display against the promotion hopefuls.

“I thought particularly first half we were excellent,” said Frankie.

“I thought our shape was great, I thought we caused Swansea quite a lot of problems to be honest. Looking back on last week’s game against Norwich, I liked the two up top, and it was just trying to get that structure a wee bit better behind it.

“We worked on it, we went with the 3-5-2, and I thought that the wing backs’ positioning at times was excellent, it caused them a lot of issues. The only disappointing part for me was the first half, I thought we should have probably went in ahead. I probably need to see it back, but I thought there was a good possibility we could have had a red card when Ched went through and also probably a good shout for a penalty kick as well.

“There were lots of, lots of pleasing parts for us. You get your just rewards at times. Another area that we worked on with the analysts was the long throws. We did it last week against Norwich and we did it again today.

“I thought we got good opportunities and chances from that as well. Fortunately enough for us near the end, we’ve popped up with Scotty sniffing about and then manages to get it off their defender. [It’s] no more than the lads deserved, I thought they deserved to win the game over the piece.”

It was a historic result for North End – picking up their first points at the Liberty Stadium while registering a first win away at Swansea in 60 years, on what would have been Sir Tom Finney’s 99th birthday.

“I just think that the players and the supporters and everybody that’s involved in Preston, we are a club that pride ourselves on trying to do the right things as best as we can,” Frankie added. “I’m delighted for everybody today in terms of getting that result for them.

“I was unaware that it was 60 years. I’m delighted for the group of players. The other thing that you’ve got to look at as well, there’s quite a lot of players missing here today as well. Credit to the players, I just thought to a man they were excellent today.

“I’ve got a firm belief that sometimes things shine on you and you get good opportunities and good chances when you’ve got that glimmer of hope and hope is a massive thing. Sometimes you need a wee bit of luck as well. Today lady luck shone on us a wee bit near the death again, as it did last week in the last minute against Norwich.

“What you’ve got to do is earn that and I thought today, I don’t think anybody could argue at all that the least today we deserved today would have been a 0-0 and to be honest we probably deserved to win the game in my eyes.”

The interim head coach also spoke on how Ryan Ledson came to be skipper for the day and the return of Louis Moult to the matchday squad, having been absent through injury since North End’s last visit to the Liberty in August 2019.

“Ryan gives everything he’s got. He’s been great the last couple of games. With Browney, DJ and Greg Cunningham missing, then Ryan to me is a natural leader, so undoubtedly, he needed to go and take the armband and he showed what it was like.

“That’s the type of leadership you need on the pitch. I said to them, ‘You’re all leaders when you go on there and just give it the best that you can do each game.’ Today I’m so proud of them, fantastic.

“Louis has come in, he’s trained well, there’s a couple of wee knocks he picked up. I had a good chat with him and the medical team as well and I thought it was a good opportunity for him to try to come back into the mix.

“I know that unfortunately the incident happened here, but he’s gone away tonight, back home with a good smile on his face. That’s what makes me more pleased than anything.”