Harry Nevin said he was pleased with how his side reacted after Tuesday’s defeat to Rochdale after North End eased to a 3-1 victory over the same opponents on Saturday. 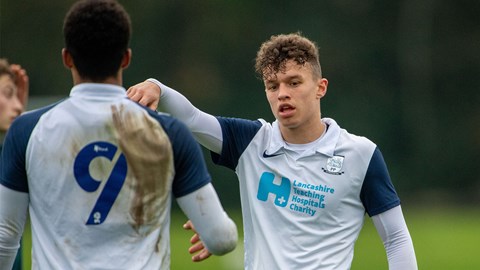 Goals from Noah Mawene, Jacob Holland-Wilkinson and Joe Rodwell-Grant were enough to secure all three points for the hosts as they got back to winning ways.

Speaking after the game to PNE.Com, Nevin said: “I thought the team reacted really well to the defeat on Tuesday against Rochdale.

“After losing that game it could have been easy for us to keep our heads down but instead, we done the opposite, we went out onto the pitch and played our game and picked up the three points.”

The Irishman had spent a long time on the injury list for North End but recently made his comeback into the squad and has now started the last three games.

“It’s been great to slot back into the defensive line after being out for so long,” added the youngster, who turned 17 earlier this week.

“I have had to work to get my place back in the team, at times it seemed like a long road back onto the pitch but its great be playing football again and now its my chance to help the team win our last few games.”

“After a great win today, hopefully that will help us finish the season strong. We just need to keep playing our game style of football that we know while keeping a positive mindset.

“We can’t take our foot off the pedal now with a few games left, its important that we finish the season strong.”

The young Lilywhites next face Walsall away before ending the season at home to Tranmere Rovers on May 1st.