Mikey O’Neil was full of praise for his side after their 4-2 victory against Oldham Athletic away from home in the North West Youth Alliance league on Saturday. 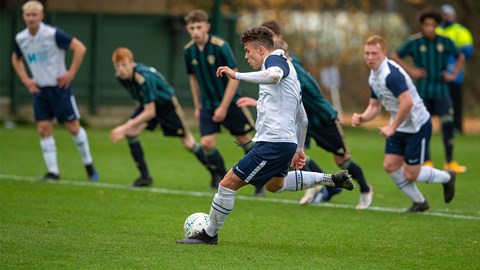 Goals from Jacob Holland-Wilkinson, Kyi Nicholson, Noah Mawene and Mikey himself rounded off an impressive away win for the young Lilywhites.

Speaking after the game, the first year scholar described his team’s second half performance as ‘very strong’.

He told PNE.Com: “It was a really good performance, more so in the second half I felt that we were very strong and continued to grow in confidence, it was important that we came out today and won the game and put the last two defeats behind us.

“First half we looked a bit shaky and conceded the early goal, but I felt like we showed good character to come back and win the game.”

The forward played a key part in the game after being brought on with the scoreline hanging in a delicate balance at 3-2, but just 30 seconds later, O’Neil finished from close range with his first touch of the game.

When asked whether he had been given any special instructions or words of wisdom before entering the pitch, O’Neil added: “Yeah, he [Nick Harrison] just told me to go on and make an impact.

“It was quite funny though because me and the manager were just speaking about the set plays and how it could be a chance to score, just right before I went on, we had a corner, so it was set up perfectly for me and thankfully I finished the chance when it came my way.”

“Hopefully we can take this momentum now onto the next game on Tuesday and try to finish the season strongly, we had some good bits of link up play today and scored four goals, if we can continue to have more performances like we had in the second half, then it will be positive.”