Ali McCann admitted the opportunity to join Preston North End was too good to turn down as he sealed his move to the club on deadline day.

Ali McCann admitted the opportunity to join Preston North End was too good to turn down as he sealed his move to the club on deadline day.

The midfielder has put pen to paper on a four-year deal from Scottish side St Johnstone, keeping him at Deepdale until 2025.

Ali is currently away with his national side Northern Ireland and will join up with his new team-mates in Euxton next week.

Speaking to iFollow PNE, Ali said: “It’s brilliant, it’s been such a long day today. I’m just so buzzing to get it all sorted and get it over the line and I just can't wait to get back and get in with the lads next week.

“St Johnstone are a great club. I’ve been there since I was young so it was difficult leaving because they’ve done so much for me when I’ve been growing up but an opportunity to move down to a club like this is just too much to pass up and I just can’t wait to get started.” 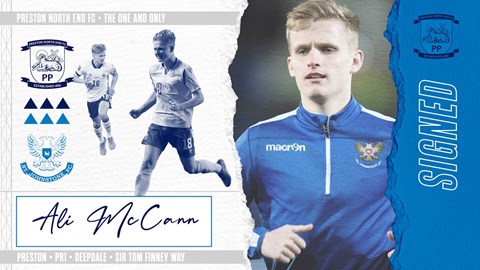 The 21-year-old central midfielder enjoyed a fantastic season with the Saints last year as they made history by winning an unprecedented domestic cup double.

“It was brilliant,” he said. “With the Covid stuff it was a bit weird with no fans and all that, we finished fifth in the league in the end and to win both cups was just incredible to be a part of.

“It was a great group of lads so it’s a bit sad to move on but it’s a great opportunity so I can't wait.

“It’s going to be brilliant [joining PNE]. We played against Preston obviously in pre-season, coming up against clubs like that and we’ve played against other [Championship] ones in pre-season. It’s just massive and it’s what I’ve always wanted to do, to move down and just experience it.

“It’s a great chance and it’s something that I’ve always wanted to do and I just can’t wait. I’m just buzzing to get going.”

With the six-time capped international already having joined up with his country, he has not yet had the chance to come down to Preston.

He’ll do that next week once Northern Ireland have completed their three-game schedule over the international break, and he'll come in to completely new surroundings, something he admits at being nervy for but ultimately excited.

He said: “Today has been torture just answering my phone all day but I’m just glad that it’s done. I can’t wait.

“I think it’s next Thursday I’ll be in and I’m just looking forward to that. That’ll be the first introduction to all the lads so it can’t come quick enough.

“It’s a brand new start, a new introduction to everyone, so I’m sure it’ll be a nervy time next Thursday but I’m just looking forward to getting in to meet all the lads and it should be good!”

McCann offered an insight into his game for supporters who may not have had the chance to see him play.

He explained: “I try and do every part of the game. I try and put myself around, getting forward, getting back, getting involved. I put myself into tackles, pressing high, I also try and chip in with goals at the other end so hopefully I can do that and the fans will take to me which is what I’ll try and do."