Tom Barkhuizen said he and all of his team-mates were disappointed after losing 4-1 to Hull City on the opening day of the new Championship season.

Tom Barkhuizen said he and all of his team-mates were disappointed after losing 4-1 to Hull City on the opening day of the new Championship season.

North End started brightly back in front of a home crowd at Deepdale for the first time since March 2020, as the No.29 set-up Emil Riis for an eighth-minute opener, but the hosts were pegged back before the break and went onto concede three in the second half.

Speaking to iFollow PNE post-match, the 28-year-old admitted that the second half showing in particular was ‘not acdeptable’. 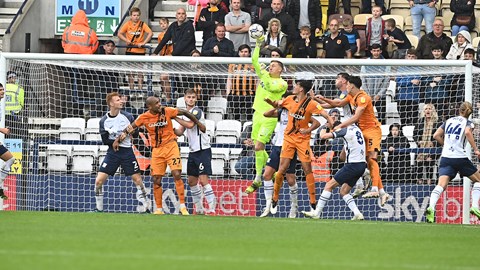 “We speak in the dressing room about starting well and you get a goal after eight minutes and you have a bright start and you think, ‘Let’s go and get another one, let’s keep going.’

“I’ve made a mistake for their first goal, it’s gone between me and Jordan, and then from there we just couldn’t get out.

“We tried to change the shape second half and again we started brightly; the ‘keeper has made two good saves off me, and you think, ‘Yeah, we’re getting back into the game, it’s there for us.’ We go and concede three sloppy goals and 4-1 is just not acceptable.”

Asked whether Emil Riis’ opening goal had come too early, Barkhuizen suggested that going in front had allowed the visitors to become more expansive in their play.

“It’s a hard one, because you want to score early, but I think it let them become more expansive and that’s where it didn’t suit us.

“If we’re being honest, we ended up getting pinned as a back five; they were doubling up, tripling up down the sides and myself and Greg [Cunningham] couldn’t get up the pitch and we just couldn’t get out.

“They controlled the game, that’s why we changed it at half-time. From then on, for 80 per cent of the second half, it’s not good enough.

“They’d obviously worked at a plan to get at our back five. Their two wingers kept a lot of width and it was tough for me and Greg to get out; we work on trying to get up to their full backs and being aggressive, but there’s times when you can’t go, and unfortunately, we just couldn’t get out.

“They were clever with their play and that’s why we had to change it. We started brightly in the second half but we had  probably ten minutes where we did alright and we created a few chances, but after that, it was just back to the first half and they scored three goals.”

The PNE man added that while he had been denied by two good saves from opposition stopper Matt Ingram within minutes of the second half restart, with the scoreline 1-1 at that point, missed chances couldn’t be dwelled upon given the eventual scoreline.

“You never want to lose but 4-1 is just not good enough. As a team defensively, we weren’t good enough and you sound like a broken record saying it’s not good enough, because whenever we get beat, we seem to get battered. It’s a mentality thing we need to change.”

The forward concluded: “Now it’s up to us as players to put our chests out and prove to them that we deserve to be here and prove that we are the players that can go and have a good season.”