Patrick Bauer said he was really happy after scoring the game’s only goal against Peterborough United, giving PNE their first three points of the season on his first league start in eight months.

Patrick Bauer said he was really happy after scoring the game’s only goal against Peterborough United, giving PNE their first three points of the season on his first league start in eight months. 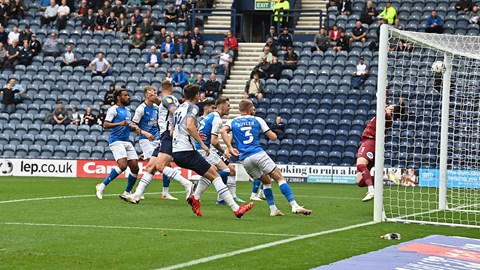 The German nodded home in emphatic style from Ryan Ledson’s free-kick in the opening stages, that proving enough to defeat Darren Ferguson’s side despite a wealth of further opportunities for the Lilywhites.

Speaking to iFollow PNE after the game, the 28-year-old admitted it had been an ‘amazing’ afternoon’s work on his return to the side in Championship action.

“I’m really happy today,” said the commanding defender. “It took me a while from my injury, but I’m really, really glad to be back now with the boys, and especially in front of our supporters.

“It’s been such a long time since I played here at Deepdale with our supporters and it was just amazing. I’m happy to contribute with a goal and that we got the clean sheet and the three points.”

The defender was also on the scoresheet in his last league appearance for the Lilywhites; hitting the target moments before he had to be stretchered off in the 3-2 away win against AFC Bournemouth last December.

“Actually I’ve scored in back-to-back league games now, it just took me over eight months!” added Bauer. “But it’s good to be on the scoresheet and obviously I was helping the boys with it. Now we are looking forward to the next games.”

When asked for his verdict of North End’s display, he continued: “I think it was really solid, I was just disappointed because we could have put the game to bed much earlier.

“I think we had five, six, seven really good chances to score. That was a disappointment, but hopefully we can make it better next week.

“When you lead 1-0, you are always a little bit under pressure, so it’s good to score the second goal, but I think we limited them to very few chances and I think it was a solid performance.”

The defender, affectionately known as the BFG among the North End fanbase, was also delighted that his goalscoring return came in front of the PNE faithful.

“The fans have been outstanding. I love hearing them singing the song again. It gave me goose bumps, it was just an amazing day.

“Football without fans is not the same and we are all so happy to have them back.”

The defender’s attentions now, though, are solely on the week’s upcoming games; with a trip to Morecambe in the Carabao Cup in midweek before a Deepdale return next weekend against Swansea City.

“The last three performances weren’t good enough but hopefully now we can start a good momentum and get us up the table.

“We recover now, we look forward to Tuesday at Morecambe away, we want to win that game, and then we are welcoming Swansea at home on Saturday.”