Frankie McAvoy said his group of players are ‘desperate’ to return to winning ways after Preston North End were beaten 1-0 by Huddersfield Town at the John Smith’s Stadium.

Frankie McAvoy said his group of players are ‘desperate’ to return to winning ways after Preston North End were beaten 1-0 by Huddersfield Town at the John Smith’s Stadium.

The travelling Lilywhites made a bright start in West Yorkshire with first half chances for Brad Potts, Daniel Johnson and Ched Evans almost yielding an opening goal, but the visitors were ultimately undone by an unfortunate own goal from Sepp van den Berg with 16 minutes remaining.

Speaking to iFollow PNE at full-time about halting the three-match losing run in the Championship, the Head Coach said: “We’re desperate to do it. What I will say is we’re a point worse off than we were at the start of last year; the first three games we picked up a point. 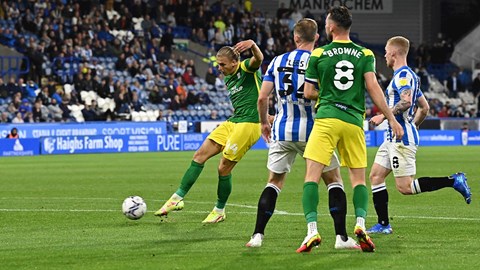 “We’ve got two games at home coming up and what we need to do is try to make sure that we win the games and be more of a threat going forwards. We look as though we were back defensively solid enough tonight and we just need to make sure that when we get opportunities and chances that we’re clinical in front of goal.”

Frankie felt his side could have got something from the game in West Yorkshire in a performance that he said was ‘more like’ PNE, and felt the nature of Van den Berg’s own goal was harsh on the Dutchman and indeed his team.

“I’m bitterly disappointed we’ve got nothing from the game. I didn’t think Huddersfield caused us many problems whatsoever.

“I thought that was more like us today. I thought we looked a lot more solid at the back, I thought our wing backs were really aggressive getting up the pitch, we had a focal point in Ched taking it in and obviously Pottsy being that lone runner and also working hard to take it in. For me, we looked like the team that I know we can be.

“It’s just one wee lapse in concentration and they manage to break through. I feel gutted for Sepp because I felt he did really, really well within the game. Sometimes, football is cruel. When you’re doing your best, your utmost to try to win points and games, the opposite can happen, and particularly when it’s 0-0, with a bit of quality or a mistake. 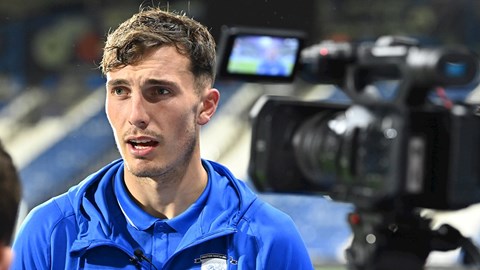 “We’re disappointed, disappointed on the whole for the group, they are so bitterly disappointed. But what I’ve said to them is that that’s more like us, we’ll keep producing those type of efforts, hard work and endeavour, they’ll get their just rewards for that. The results will come.

“I thought the fans were excellent out in numbers tonight, magnificent. I’m just bitterly disappointed that we’re sending them home with nothing.”

The goal was another source of disappointment for Frankie but he said his team must now turn their focus to Peterborough United’s visit to Deepdale this weekend.

“At the end of the day, Sepp has come over to try to cover it and unfortunately for him, he’s steered the ball into his own net.

“But we will look at it and assess it and the most important thing is that that it’s done and dusted and we’ll look forward to Saturday. We’re at home to Peterborough and we’ll look to go and win the three points, that’s what you need to do.”