Frankie McAvoy was extremely disappointed at the nature of the goals his side conceded in the 4-1 defeat to Hull City.

Frankie McAvoy was extremely disappointed at the nature of the goals his side conceded in the 4-1 defeat to Hull City.

PNE took the lead through Emil Riis just eight minutes into the first game of the Championship season, but the match was turned on its head by the visitors.

It was Keane Lewis-Potter’s equaliser before half-time which started Hull’s comeback and Frankie was frustrated at that goal in particular.

He told iFollow PNE: “[I’m] extremely disappointed for everybody, the supporters that turned out in great numbers to be honest.

“I thought we started well, scored a good goal, but as soon as that happened we went into a defensive mode where our two wing backs started to sit in, we became a back five.

“Hull started to dominate the ball and I just thought that we looked as though we were trying to hang on and hope that we could win the game 1-0.

“I could see the goal coming, that’s why we changed it at half-time. We worked all week, showed them the dangerous runs Lewis-Potter makes from out to in and we got done with it for the equaliser which is extremely disappointing.” 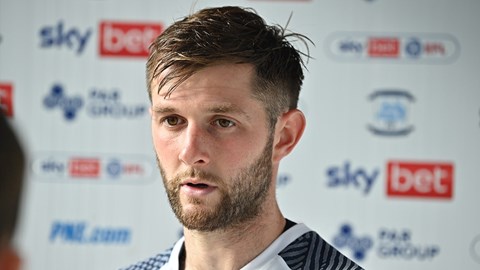 Frankie chose to make two changes at the half-time break, bringing Brad Potts and Sepp van den Berg on in place of Emil Riis and Greg Cunningham, and that brought about a change of system, too.

Tom Barkhuizen, who had been operating as a wing back, was moved further forward as van den Berg took over duties on the right of a defensive four.

Frankie said: “When we changed it at half-time we went to a back four and the reason we went for a back four is because I didn’t think we did well enough in terms of being an offensive threat.

“So when we changed it to a back four, I thought we started really well second half. The second goal’s the killer, a bit fortunate from their point of view but we had a couple of great opportunities and chances to take the lead to go 2-1 up and goal’s change games so that was disappointing the second goal.

“I was trying to just keep them as positive as we can to go forward. What I will say is when we play the back five - the back three which becomes a back five at times - we look defensively solid, but at times we’re not as good of a threat up top.”

You can watch Frankie's full interview on iFollow at the top of the page.