Frankie McAvoy rued PNE’s “sloppy” defending which led to Reading’s goals in the 2-1 defeat in Berkshire.

Frankie McAvoy rued PNE’s “sloppy” defending which led to Reading’s goals in the 2-1 defeat in Berkshire.

North End fell behind in the 28th minute as Femi Azeez tapped home at the far post after Daniel Iversen had got a hand to a cross from the left.

Daniel Johnson then drew level from the penalty spot, but Reading were back in front eight minutes later as John Swift hit an effort off one post onto the other and into the back of the net.

“If we’re going to concede sloppy goals like we did, it’s going to be tough to win games,” admitted Frankie.

“What was a strong point for us [previously] was defensively we looked really solid. We’ve had six clean sheets [since I took over], but today I thought the goals we conceded were extremely poor.

“And what they did, they changed the system, similar to how Brentford did it when we went back to our 3-5-2 against a 3-5-2, and unfortunately in the first half I don’t think we did well enough. I thought we looked a wee bit fragile defensively. 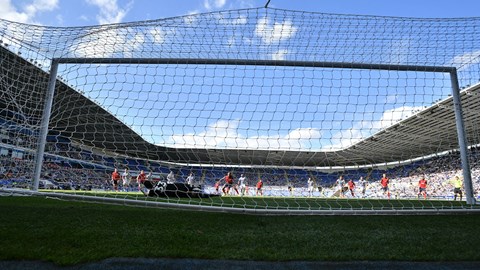 “Second half was a lot better for us. [It was] a lot more positive and I thought we looked as though we had a good opportunity and chance to go and try and take something from the game, but again, any ball over the top we looked sluggish.

“They looked as though they could cause us problems when they got the ball forward which is disappointing for us because as I said before that’s what we’ve done well, but the two goals for me is really poor defending on our part.”

In the build-up to the second goal, PNE forward Scott Sinclair went down looking for a free-kick and no doubt felt hard done by when the referee waved away the appeals.

Frankie was frustrated at the lack of a decision, but by no means placed the blame of conceding the goal on the man in the middle, Josh Smith.

He said: “The second one is just difficult to try and comprehend to be honest. I don’t like having a go at officials, I know it’s a difficult game for them, but I thought it was a clear free-kick for Scott in the middle of the pitch, but they played it on.

"But he’s still 70 yards from our goal and what they managed to do is come inside the pitch, despite us working at trying to keep them outside, and it’s just poor right through the centre of our defence.

“If we’re going to defend like that, we’re not going to win many games, it’s going to be tough to win games. So what we need to do is quickly tidy that up, get a wee bit more solidified, which they have done to be honest, but today was a bit disappointing.”

Going forward, though, was a pleasing point for the head coach, and on another day North End could have had many more goals to their name.

They created a flurry of chances in the closing stages, with Brad Potts and Ben Whiteman bringing top drawer saves out of goalkeeper Rafael Cabral.

“The goalkeeper makes a couple of good saves for them," added Frankie. "We were a threat when we managed to put the ball in the box, but there’s no use doing it when you’re behind.

“What you’ve got to try and do is start well. We started well last week, but we became a wee bit too defensive.

“Today I thought we started okay, but what we need to do is get that balance right and getting that front two where they’re able to take the ball in and allow us to work ourselves up the pitch, with the wing backs breaking forward getting into the opposition box.

“The second half was a lot better, but for me, when we concede sloppy goals like that, it’s tough.”

You can watch Frankie’s full interview now on iFollow PNE.