Ryan Ledson admitted his superb outside-of-the-boot strike was up there with the best he has scored in his career.

Ryan Ledson admitted his superb outside-of-the-boot strike was up there with the best he has scored in his career.

The Lilywhites’ No.18 struck minutes after Cole Stockton had levelled the tie at 2-2, restoring the visitors' lead with Sepp van den Berg making sure of the win 15 minutes later.

Speaking to iFollow PNE post-match, Ryan said: “It was a good strike, wasn’t it? 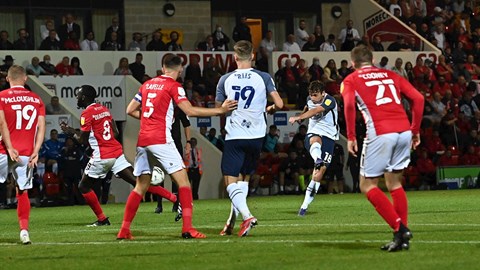 “It’s bounced to me off Emil and I’ve struck it well and luckily enough it’s gone in the top corner.

“That’s definitely up there, especially in front of the away fans, it was a great finish.

“With the game, the way it went, it was 2-2 and it was an important goal and then we went to get another one and kill the game off at 4-2.”

North End had led 2-0 until Anthony O’Connor pulled one back in first half stoppage time, which the midfielder said was something of a blow at the time, and words were had in the dressing room at the break.

“It’s disappointing, having a go at people for not doing their jobs properly and obviously it lets them back into the game. But we’ve shown great character to go and win the game.

“I think we started well. The goal before half-time killed us a little bit and gave them the opportunity to get back into the game.

“We always knew we had the quality, we were going to get chances in the game and it was about finishing them. Luckily, mine went in.”

Asked about Van den Berg’s contribution, Ryan joked: “It’s about time he put one in at our end other than the other end!

“We gave him a little bit of stick there in the changing room. But Sepp is brilliant; he can fill at centre back, or right wing back, and he gets in at the back stick late on there to get the late one.”

The victory sealed North End’s progression to the Carabao Cup third round, when Premier League sides competing in Europe enter the competition, but Ledson isn’t fazed by who the opposition will be – instead hoping for a home draw.

“I'm not really bothered to be honest,” Ledson said when asked about his preferred third round opposition.

“I’d rather someone at home, get a full house at Deepdale and hopefully we can beat them.”