Peter sat down with iFollow PNE to cover a range of topics in an extended chat ahead of the opening game of the Championship season.

Sixteen months on from the start of an unprecedented situation for football and the world as a whole, life takes another step closer to normal this weekend as Preston North End supporters make their long-awaited return to Deepdale.

Peter Ridsdale is just one of many to have missed the presence of fans inside stadia, and he is ready for supporters to make their way back through the turnstiles on Saturday as PNE kick off the new Championship campaign against Hull City.

“The last 16 months have been eerie,” admitted Peter. “It's almost like we've been playing football when it hasn't felt like real football.

“Football is only about the supporters, nothing else, and the fact that we've had to continue to go about our normal business of trying to win football matches but without our supporters has been an experience that I hope we don't see again.

Saturday will be a new experience for many fans, not only due to their return after such a long time away, but because of the new fan zone set up by the club.

Following a number of “stuttering starts” in establishing a fan zone, Peter is pleased to see the plan come into action and is hopeful supporters can enjoy the pre-match atmosphere.

Peter said: “There's always been a desire to provide the fan zone, the difficulty we've had is the right location.

“So for the Hull City game, we will be launching the fan zone and we hope it will be well received. It'll be our version of what our supporters have been telling us they want and they've seen elsewhere, and I hope that it's used and enjoyed.”

He later added: “We hope people enjoy it. Our supporters have been very patient and this is our chance to say that we have been listening, but it's taken a lot of time because we want the right solution.”

After the new pre-match rituals, fans will then get to make their way through the turnstiles once more and return to their seats in the stands ahead of the Championship opener.

Leading PNE on Saturday will of course be head coach Frankie McAvoy, who was handed the job on a permanent basis after taking 17 points from a possible 24 at the end of last season, which made it “very difficult” to look elsewhere for Peter and the rest of the decision makers at the club.

Peter said: “When you've got somebody in situ actually doing the job, you see how the players respond, you see the results we get.

“When you're at the training ground, you see the players day in day out, you get their reaction to Frankie being at that stage the interim head coach. Frankly, there was nowhere else to look.

“He did a very good job then and he's done a very good job in pre-season, and we're now down to the real thing, which is getting points on the board in the league when we start the season.”

A pleasing take from the pre-season period for Peter has been the involvement of youth within the first team, with the likes of Lewis Leigh and Josh Seary just a couple of Academy players to have been used with the senior squad.

He told iFollow PNE: “I think when you've got young players you've got to have a football management team who are prepared to give them a chance. It's strange because we've been criticised from certain quarters in the past, probably fairly, as we've had some good lads, some that probably haven't had as much of a chance here as opposed to being sent out on loan.

“I think to be fair to everybody, for the first time we genuinely have players [at the age of] 16, 17, 18 who are knocking on the door of the first team already, and I think that's a pleasure. I think we've got a head coach who will give them the chance.”

For those younger players, or even senior for that matter, who aren’t managing to get the minutes they desire with the first team, they will this season have the opportunity to feature in the Central League.

PNE have re-joined the division, entering a team which will be led by first team coaches Steve Thompson and Paul Gallagher.

Peter said: “One of the challenges when you've got a 24/25-man squad is to make sure that they all get enough game time. Everybody wants to start on Saturday and of course we can only start with 11, the number of substitutes has gone back from nine to seven and only three can be used instead of five.

“We've also for the first time for some years got a very, very exciting crop of young players who have come out of the Academy and also need adult football. So having a Central League side playing a dozen games or so gives us the opportunity to give them adult football here rather than trying to find a home somewhere else for them.

“The problem with putting them out on loan is if you then need them on a Saturday you can't just recall them, so it serves a number of purposes and it's timely. With the size of squad we've got, just about anybody in the 25-man squad thinks they should start.”

Within that squad available to Frankie are some of the five signings made so far this transfer window, including the return of January loans Daniel Iversen, Sepp van den Berg and Liam Lindsay.

Izzy Brown and Matthew Olosunde, who are both unfortunately sidelined with injury, make up the rest of PNE’s business so far, which Peter offered an insight into.

He explained: “There aren't many Championship clubs that have spent very much money. We spent quite a lot of money last autumn and January bringing in Emil [Riis] and bringing in Ben Whiteman.

“Sometimes that's sort of forgotten that we've spent that sort of cash so we have invested, but what we've also done is tried to be smart as well by bringing in players who are available, and just because we haven't paid a transfer fee for a number of the players doesn't mean to say they're not quality players. We've brought in, I think, since the start of last season nine players that are still with us.

“There's always the question from ourselves, never mind our supporters about a 20 goal a season striker. They're hard to find. We've done well in the past. Since we sold Jordan Hugill, I think we’ve brought six different strikers into the football club with varying success.

“We're hoping those we've got now will do a job for us. Certainly we saw enough in Ched [Evans] since he came in January and in Emil to add to the ones we already had. I think we've got a strike force that can score goals but of course, we will add in that department if we can and we're looking every day, it's not as if we're not looking, but they are few and far between.”

Watch Peter’s full interview with iFollow PNE at the top of the page as he discusses more about working with Frankie, transfers and the launch of the new third kit. 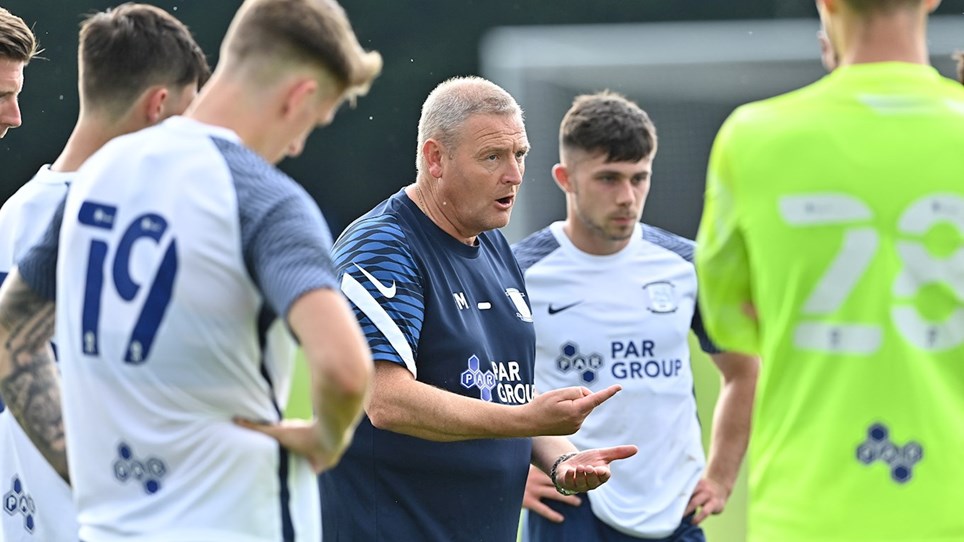 
Frankie McAvoy was delighted to involve some of the younger players in PNE’s first pre-season game of 2021/22 against Bamber Bridge.