Scott Sinclair was pleased to score his first goals of the season as he hit a brace in the Carabao Cup first round win over Mansfield Town, but said the most important outcome from the game was bringing the winning feeling back to the dressing room.

Scott Sinclair was pleased to score his first goals of the season as he hit a brace in the Carabao Cup first round win over Mansfield Town, but said the most important outcome from the game was bringing the winning feeling back to the dressing room. 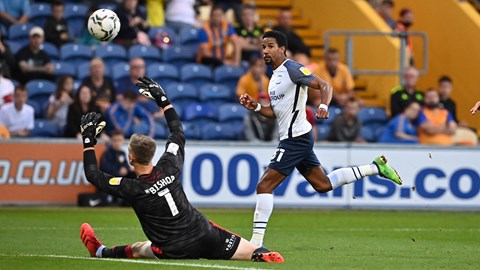 North End’s No.31 opened the scoring with a clever chip over onrushing goalkeeper Nathan Bishop, whom he again beat with a low finish into the corner nine minutes from time – each effort coming either side of substitute Emil Riis' second half strike.

Speaking to iFollow PNE at the One Call Stadium, Scotty said: “I really enjoyed it. I think the main thing is that we won the game, just to get that morale and the winning feeling back around the dressing room, giving us confidence going into our next game.

“They gave us a real good fight, they were well up for it and they do make it tough for us, but for us, it always about getting that first goal.”

The 32-year-old had been frustrated having had to sit out Saturday’s Championship opener against Hull City while he was self-isolating.

He continued: “I was isolating, so I missed the first game of the season, which was very disappointing, but I’m here now and just glad to be back out there.

“You do all the hard work, you train, double sessions, pre-season, and then comes to it and you’ve got to isolate, which was really disappointing.

“Obviously, I want to be involved in the games, but it was one of those things, I had to put it to the side and make sure I’m ready going into the next game, which I was today.”

Sinclair was supplied by two great passes for his goals; from Sean Maguire in the first on the counter attack, while a slick first time ball from Ben Whiteman cut open the defence for the second.

Sinclair added: “When he’s [Whiteman] in control of the ball, he can see the runs and he’s seen me today and put me through. My first goal as well with Seani and Pottsy, I think we broke really well and it was a great ball for Seani to set me with my first as well.”

The forward was also pleased to seal progress into the next round of the Carabao Cup for the travelling North End faithful, seeing the Lilywhites in action on the road for the first time since February 2020, just a month after he joined the club from Celtic.

The PNE contingent inside the One Call Stadium were in great voice, with Sinclair’s chant ringing around the away end several times throughout the night.

“That’s always a nice feeling,” the No.31 added when asked about hearing the wonderful, magical chant. “The main thing is that when they do that, is to win the game. We did that, they’d be happy, we’re happy and we go again for the weekend.

“They [the fans] were amazing; all the chanting and singing, basically bringing that atmosphere. That’s what we’ve missed as players most, to go back to that and hearing the crowd, especially when we score and hear them chant away.”

Focus for Scotty and his team-mates has already turned to the weekend’s assignment; a trip to the Madejski Stadium back in Championship action, facing Reading.

“Coming back from a defeat, you always want to get the win, no matter who you’re up against. For us, it’s getting that confidence going into the next game, ready for the weekend going away to Reading.”

Watch Scotty’s post-match thoughts in full now by clicking on the video above.